It was a good night in our new home at the Navy Lodge – we each had our own bed room. Mine has two little beds and Diane’s has one big bed. I’m the one who chose my bedroom, by the way. I’m good with the little bed. Oddly, we both woke up early in our own bedrooms. I wonder if that means anything. But, Diane woke up with a stuffy nose this morning which makes me believe that I provide some sort of antibiotic aspect to Diane’s sleeping time. This is the first time she’s been congested on this trip so that has to be true.

Yeah. That’s the ticket! I’m good medicine for her.

She’s good medicine for me, too, but I don’t get congested when we sleep in different rooms. I’m immune to everything. I’m pretty sure that’s true because, much to Diane’s dismay, I eat stuff I’ve dropped on the floor. Any floor. Really. And I’m a beacon of health in all aspects. Except when I’m forced to limp.

This morning Diane made coffee in our little two cup coffee pot. They make those things, the two cup pot, in an effort to control how much coffee people ingest. Well, there are ways to foil that effort. We just make extra pots full. When the little pads of coffee are gone, she improvises by tearing the tops off those little Keurig cups and dumps them in a paper towel because we don’t have filters. It works. 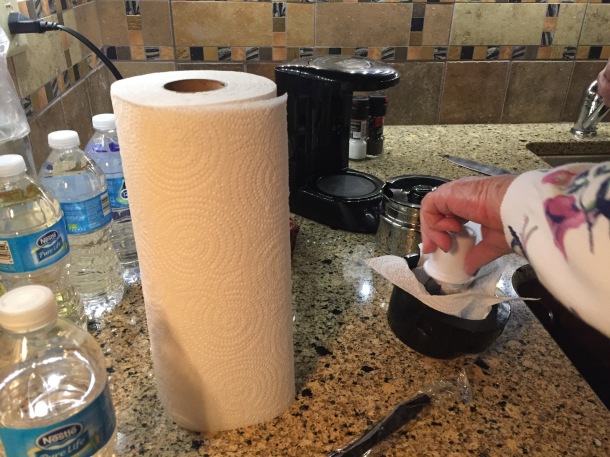 The thing about coffee is that no matter how bad a cup of coffee is it can always be resurrected with some half & half and a bunch of sugar. That isn’t good for me, of course, the sugar, because of my medical condition. But I have cut down from six cubes of sugar to four, and from six cups of coffee to three.

In addition to coffee, Diane made us a wonderful breakfast of oatmeal that’s been stored in little pouches for six or seven years, but it still tasted great. That’s because I poured a bunch of brown sugar on it. You got the pourable part, right? Something new for me. Normally brown sugar, in my world, can be packed very tightly, but Diane bought this little container of pourable brown sugar. The little granules look like tiny little BB’s and, since they don’t stick together, I figure that two tablespoons of pourable sugar equals about half a teaspoon of packable normal brown sugar. I didn’t test that, of course, because I’m neither a cook nor a scientist with a math degree. By not having imperial evidence to the contrary, I went with the assumption that my theory was correct and poured about 4 tablespoons worth on my oatmeal. My taste buds deemed the assumption to be spot on. It was wonderful. 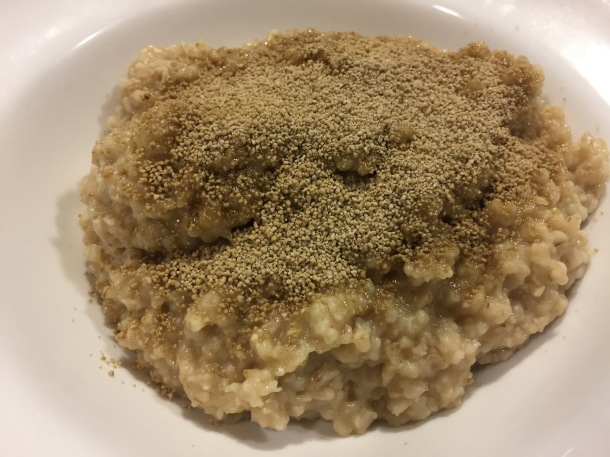 Today is a day of rest. So, we’re resting right now. It’s 1030 and Diane is still in her jammies. I’m semi-dressed because I was forced to walk down to the breakfast area at 0700 to get Diane a sweet roll and to resupply our dwindled stock of little creamers for my coffee. Since our suite of rooms is absolutely as far away from the lobby as possible, it wasn’t a short walk. Half way there I started to chafe and wished I’d worn my underwear. I was in a hurry, however, so didn’t bother. I’ll pay for that later.

We left our room only once today so we could get gas for the rental car. While out we took a trip to the business end of the base and saw a couple of old LSD’s tied to the pier and that brought back some memories.

The ship in the back is the USS Gunston Hall LSD-44, and the one closer, to the right, is the USS Carter Hall LSD-50. They’ve been around for a while and aren’t quite as sleek-looking as their newer sister ships.

Before we go to bed for a few hours sleep – we’re getting up at 0415 – I’ll make another trip out side, maybe two trips, to load our big suitcases into the rental car so we won’t have to deal with them in the morning.  The remainder of the day we just lounged around reading, and watching a movie (“Along Came A Spider”). Also, Diane did the laundry so we won’t be carting dirty clothes home.

In 12 hours we’ll be at the airport waiting for our flight home. That means it’s time to stop and start eating the remainder of our food. Should have it gone by midnight.

The weather news is that it’s 70-75 during the day here in Virginia and at home it raining in the valleys and snowing buckets on the mountains. Gonna be fun getting home. The good news weather-wise is that the only thing the wind did at home is knock over a few potted plants on the porch.