The evening before we left, Ruth called to wish us a safe trip home. We missed the call because neither of us had our phone sound off. When Diane discovered this she called Ruth back and they had a nice talk during which I heard Diane say, more than once, “Oh, no!” This got me interested so I listened a little harder and determined that something bad had happened, but it wasn’t a health issue. What happened was, while Ruth was working with Ovide, preparing tons of food for a Lions International event, someone broke into her house and stole all her jewelry. Nothing big was removed, just small stuff that could easily be carried. They also emptied all of her dresser drawers onto the floor. She discovered the break-in when she returned home from her exhausting day at 2200. The police were summoned and now she must fight her insurance company for just compensation.

We got up at 0415 to sweep the room for personal belongings, get checked out, and get to the rental place before 0600. We beat the 0600 deadline fo turning the car in by 15 minutes but that wasn’t really difficult because the Norfolk Airport was only 6 miles away.

After the car was checked in, and unloaded, Diane asked the Dollar Rental Car Guy is there was a shuttle to the terminal. He looked at her and said, “It’s a 2-minute walk”, and pointed to a path, “right through there.” Indeed, we could actually see the terminal from where we stood, but hurking all those suitcases in the dark just didn’t appeal. Still, we shouldered the bags with handles, and got the suitcases ready for that 2-minute walk.

Just then a really nice Dollar Rental Car Lady, from Georgia, came to get the car and said, “You can’t walk to the terminal in the dark. You never know what can happen. Get in the car and I’ll take you to there.” So, we put all the luggage back in the car and she drove us to the American terminal. It was an unexpected act of kindness, but we wished she had appears about 10 minutes earlier, when all the luggage was still in the car.

At the terminal, I requested an upgrade to First Class, and was prepared to pay whatever it cost. But, since we used air miles for the original seat, it couldn’t be upgraded. But. the second leg from Chicago home was already First Class so the apparently qualified us to get First Class treatment for our luggage. We were able to check all four bags for free, even the overweight one.

The Norfolk to Chicago leg was on a much smaller passenger plane than we’ve encountered during our travels. There were only six First Class seats (three of them remained empty for the flight), and the coach seating was two seats on either side of the center aisle. Cozy. The big plus was that there was far more leg room on this little guy than we had on the big one from Chicago to Bradley on the way over. Interesting. It was comfortable so we were just fine. Plus, it was only a two-hour trip.

In Chicago we spent about half of our 1-hour layover in the USO lounge, and the other half walking the 2 miles from Gate G-7 to Gate K-5. The Rotunda, where the USO is, was on the way so it was convenient. I ate a bagel and Diane had a banana while waiting.

We arrived at K-5 just in time to sit down for about 30 seconds before they called the First Class folks to board. So we did. We had seats 3B and 3C which turned out to be the front row on the right side of the plane. We had all the room we needed to stretch out and enjoy the flight. The food sucked and the service was good, but the food sucked. Did I mention that the food sucked? Everything except the shrimp. The shrimp didn’t suck. Fortunately, I got to eat all of those.

Regarding the food … when the flight attendant got to our row, in the front, she explained that, since we were flying West, she had to start serving from the back of First Class so she was all out of the Roasted Chicken Salad. All she had left was the Cheese Ravioli’s in White Sauce. Diane explained that she was lactose intolerant and could  not eat the raviolis and would just have to go hungry. The flight attendant said, “maybe I have a solution,” then left for the flight deck. She returned with the First Officer’s salad and gave it to Diane telling her that she owed the First Officer a big thank you. Really? The reason for the shortage, we learned, was because First Class passengers can pre-order their meals on-line. Nifty for those who know. It worked out, however, and we were both fed. The ravioli’s sucked, but I ate them anyway. I may have mentioned that already. Part of the problem with the ravioli’s is that I just don’t like them to begin with and they were just worse because there was no meat inside of them. Just cheese. The wrong kind of cheese. I know, I should just be grateful that I had something to eat, and I truly was. So, perhaps, the food really didn’t suck. Maybe I just didn’t care for it. The shrimp made up for whatever was wrong with the rest of it that I didn’t like.

Once we were airborne out of Chicago Diane and I plugged our little Apple ear buds into the plane’s system and watched “Central Intelligence”. It was a funny movie and we both laughed right out loud a few times. I suspect we woke up the guy across the aisle from us more than once but he didn’t complain. After the movie we both read for a bit then napped, and when we looked out the little window and saw this, we knew we must be close. 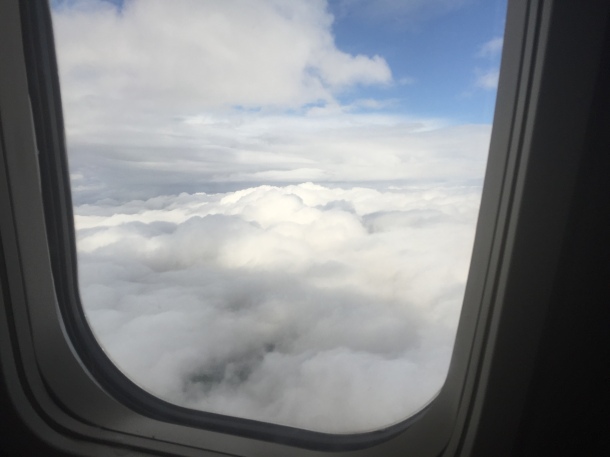 When the plane finally made it to the terminal, and we stepped inside, we were happy campers. When we discovered where the terminal was located with respect to the baggage claim area, we weren’t happy campers. But, we trudged on. I thought we’d be in pretty good shape because it appeared that we were just down the road from where the Alaska planes come and go, and that was essentially true. But we weren’t “just down the road.” We were “waaay down the road.” Matter of fact, I’m sure that the walk from the very tippy end of the American terminal to the baggage area accounted for about 2 miles of the 3.5 miles we walked in airports this day. Really.

I’m basing this claim on the fact that we travelled down three (3), count them, three moving walk-ways that are separated by about 50 yards and are each about 100 yards long. Then, once we made it down to the baggage claim area we had to walk all the way to carousel 9, there are 10 of them. The escalators from the gates drops folks off between 2 and 3. As we continued, and finished this epic trip I couldn’t help but think that we were being subjected to some form of punishment that those who ride American Airlines airplanes are subjected to on a routine basis. In Portland, Alaska Airlines is just a short hop and a skip from where they land to where they drop the luggage, on carousel 2 and/or 3.

There is a plus side to the baggage area, I must admit. Once the carousel started turning, in the wrong (clockwise) direction, of all the bags that came out of the little shute in the wall, our four were in the first 10 bags. Amazing! That’s never happened to us before. We’ve always had to wait until everyone else got theirs before ours showed up. We chalked this up to the bright orange PRIORITY labels the lady in Norfolk attached to the baggage claim tags on all four bags. That was huge.

Once we got the bags, we trundled our way outside to await our lovely daughter, Jennifer. She had snagged Diane’s truck the previous day in preparation for picking us up. When we hit the ground we texted her, letting her know that we would be at the American terminal, not Alaska – they are at opposite ends, as I mentioned. At that time she was on her sixth trip around past the arrival terminals. By the time she parked in front of us she was just completing her tenth circuit of the airport. It was good because the truck is bigger than she’s used to so it gave her lots of time to get used to driving it in heavy traffic. This guy must have been in a hurry to go fishing with whoever he was picking up. Interesting.

Jennifer did a terrific job and got us home safe and sound. Well, almost home. Diane wanted to stop at Means Nursery so she could get some roses for Lydia, Ceiarra, and Nina (a Denmark exchange student). They are the only seniors on the team and tonight was Senior Night. 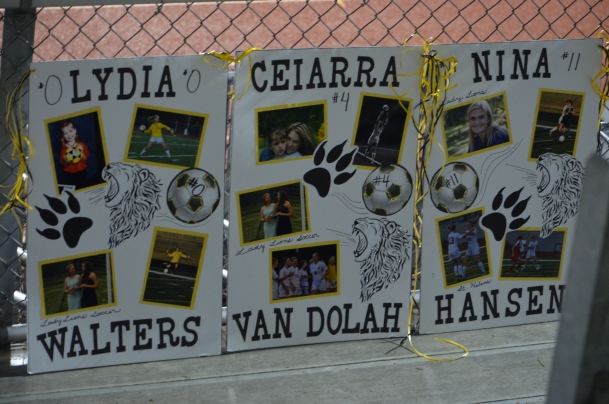 Our arrival home was heralded by the happy barks of our three dogs, and cold weather. After enjoying mid-70 weather for the past month it feels like it’s about 12 degrees here. The cat couldn’t care less that we were home and just walked away. After all the excitement, and all of them had been properly scratched and petted, Jewel returned from her trip to DMV where she had registered her “new” vehicle. She did a great job of keeping the animals healthy and the flowers fed with her broken wrist. Thankfully, she had help from The Walters clan when needed. Like for opening cans, tearing tops off of packages, using scissors, etc. She resorted to eating food that didn’t need to be cut up so she could feed herself.

Back to soccer, sadly, our girls lost 2-0. Our girls weren’t playing together very well and allowed the Hillsboro strikers too much freedom. Both goals got past Lydia, who played the first half of the game. The first one was kicked from about the 25-yard line and players were blocking the ball from Lyd’s view. The ball sayed low and by the time she saw it there wasn’t much she could do, but she made a heroic dive worthy of a game highlite. Previous to that, she blocked many close shots on goal from strikers who got by the St. Helens defense. It was amazing to watch. She took at least three hard kicked balls directly into her body and caught them. She also blocked many others away from the goal to her team mates. Additionally, the Hillsboro team missed many kicks wide of the goal so it was just a matter of time before they scored. It was one of those games that could easily have been 12-0, but our Keepers held strong. Another plus at the soccer game was seeing Daniel, Jeran, and Dan’s Mom, Linda, and friends Jacqui and Georgie. Georgie is a recent SHHS graduate, friend of Lydia’s, and a total Girl Soccer Stud. 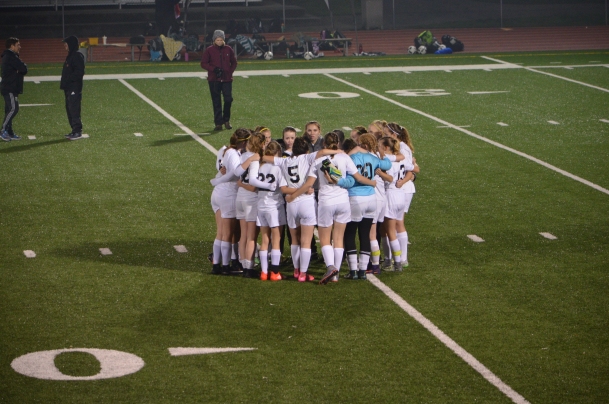 When the game was over both Diane and I were exhausted, both from watching the game, and because we had been up since 0100 local time – about 18 hours which is far too long for old people.

Guess we’re back on the dog’s schedule just that quick.