I’m saddened that I can’t find very much about Running the Gut, Dragging Broadway, or something similar on the internet. The most pertinent match was for an event, Dragging the Gut Festival in McMinnville, OR. They claim this cruise in started in 1903 which makes it the oldest one around by a long shot. The sad part for me is that these moments from my youth mostly have a totally new meaning nowadays. Using “Dragging” as the verb I found references to LBGT folks dressing up for an organized walk, or medical procedures that will clean you out and make you feel all better. With “Running”, it’s all about that – running. Foot races through the streets of many towns.

Now, I’m not against any of those things, but I cling to the memories I have of driving my car along with a bunch of other folks up and down Broadway, 1st Street, or which ever street is the main one in town, for hours. It was a harmless social event.

Yesterday I re-created a bit of history here in St. Helens when I took Diane’s Mom, Jean, home from the Sassy Ladies’ Estate Sale at the church. Mom will be 90 in a little over a week and she’d been at the church for a number of hours when I arrived to fix a light, and it was decided that I should take her home to a more comfortable chair. I was glad to do it, but Diane wanted me to swap cars with her so Mom wouldn’t have such a difficult time getting in and out of the Crossfire convertible. I consulted Mom on that decision and she vetoed the swap, choosing to zoom home in the hot rod.

I took the long way home, of course, which meant I had to daringly insert us into a mass of traffic on Highway 30, then almost immediately exit on to Old Portland Road. The insertion was flawless, as was the exit. It’s a very quick little rig.

Many people who drive by St. Helens on Highway 30 are doing just that … they are ‘driving by’. Old Portland Road takes the traveler to the heart of St. Helens which is down by the river which cannot be seen from Highway 30.

Mom’s hair was flying all over the place and she was making a gallant effort to keep it in place until I suggested that it wasn’t going to get any better so she may as well just let it fly. She did and was more relaxed by not having to keep it neat. And, she never stopped smiling.

We drove Old Portland Road to where it ends at 1st Street down town, which is the St. Helens Gut, drove the length, turned left at the Klondike Restaurant (great food), then followed it around the loop, past the old court house, then right on 1st Street past the Columbia Theater. This entire downtown area was transformed in 1998 to film Disney’s “Halloweentown“.  St. Helens was also used for many scenes for “Twilight“. It’s a fun place.

After turning right on 1st Street from the Court House Square, you are forced to turn left about 2 blocks down and the road turns in to Columbia Blvd. It’s almost like magic if you aren’t paying attention. Then again, if you weren’t paying attention you’d probably run into the house at the end of 1st Street and earn a visit from one of the town Constables.

Columbia Blvd comes down from Highway 30 in a more direct route than Old Portland Road, in case you’re interested in visiting. Going back, however, Columbia Blvd splits at 13th Street and becomes St. Helens Road, a one way street, which ends at Highway 30. Going right on Highway 30 takes us to Pittsburgh Road where we turn left and meander our way into a large residential area where Mom lives.

Now, Diane’s fear about taking Mom in the convertible was her ability to get in and out of it. She’s got a bad knee, sore back, and, as previously mentioned, she’ll soon be 90. I’m happy to report that getting in wasn’t a problem at all because all she had to do was back in a ways and sit down. She was careful because I warned here it was a ways down to the seat. Once buckled in she started smiling and didn’t quit until well after I’d dropped her at home, I’m sure. Oh, and she got herself out of the car just fine, all by herself. Made me proud. 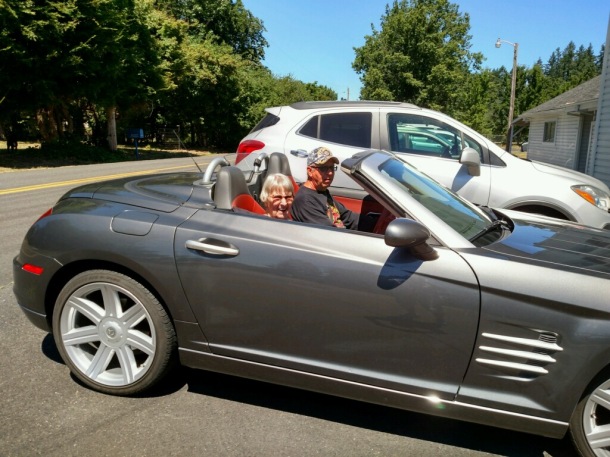