To ensure the tense is correct, I must admit that I wrote all of this yesterday.

Today was supposed to be a quick trip because it was only about 180 miles. Less than 4 hours, right? Well, that plan was derailed by two of our GPS systems when they routed us across Highway 37 which runs through the San Pablo Bay National Wildlife Refuge. It wasn’t the Wildlife Refuge that was the problem because it’s actually not a bad road. The road is only one lane each direction but once you’re on it, the only way out is to keep moving forward. On this Sunday, moving forward meant going very slow most of the time, stopping completely some of the time, with short bursts of speed all the way up to 30-40 mph. What we didn’t know, and apparently our GPS didn’t either, was that Highway 37 is one of the main ways to reach the Sonoma Raceway which is located about 2/3 of the way across.  Once we reached that exit we could see the stands for the racetrack and they were full. This was about 1100 this morning so our arrival in Fort Bragg, which isn’t really a fort at all, just another town on Highway 1, was pushed out to after 4 pm. We wanted to be there nice and early, like 1 pm, so we could visit some of the sites in this city. Specifically, Diane wanted to visit Glass Beach.

For this stop, Diane obtained two rooms at the city’s Motel 6, an establishment she previously vowed to “never” use during our travels. But, the price of two rooms there was cheaper than one room at any of the other establishments and the girls won’t have to sleep on a sofa bed.

Once we got checked in and hauled our luggage upstairs to our rooms (no elevator), we went searching for Glass Beach. We found it about a mile north of Motel 6 and it was easily accessible for most, even those with broken arms. once we reached the beach, the girls were fascinated with the glass on the beach then Lydia went looking for hermit crabs which were abundant. Ceiarra chose seek pieces of rock and agate mixed, leaving the glass alone.

There were people all over the place checking out the beach. An Indian family saw Lydia with one of the hermit crabs and had to have photos of her messing with them. She’s always gone down that road less travelled by girls, opting for the bugs, snakes, and such, so crabs were right in her wheel house. She had a ball discovering, and harassing them. She was not allowed to bring any with her back to the truck. So, she found a really nasty looking shell that had once been stuck to a rock, and was partially covered with debris that had once been growing, and you just knew it was going to smell to High Heaven once it dried out, and insisted that we take it home. We folded on that request because we knew there were plastic bags in the truck she could use to wrap it up. The bag remained in the truck bed. By the time we get home whatever is in that bag is going to be nasty, I’m sure.

Ceiarra, thankfully, kept it clean and was allowed to get her rock collection back to the motel in the truck proper.

After the beach we discussed dinner options and chose Denny’s which was next to the road leading to the beach. We don’t normally patronize Denny’s during our trips because we’ve bad experiences in the past. It’s been a while, though, and thought we’d give it another try. Glad we did because the food was great and the people greater. It was a pleasant visit.

Our waitress, Lisa, came and took our orders and when she left Ceiarra said that Lisa smelled like her Mom did. When she came back, Diane asked her what fragrance she was using and she said, “Just my hand sanitizer.” That was unexpected. Diane explained the reason for her request, that C had lost her Mom no long ago, and that Lisa’s fragrance reminded her of her Mom.

Lisa teared up and walked away from the table and went back to work but she was truly mulling a proper response for Ceiarra because she returned after a bit, tears streaming, and explained that she truly believed that C’s Mom had been there at that moment because our loved ones are always close, even when they’re ‘gone’. Then she placed a bottle of strawberry scented hand sanitizer on the table as a gift for Ceiarra. A little later she dropped off a piece of chocolate cake of some sort and said “hope you aren’t allergic to peanuts.”

Needless to say, Lisa got a good tip and a hug from Ceiarra before we left. It was a good stop. One of those times when you know that you were led to a place for a reason. It was good for both Lisa and Ceiarra.

Now we’re back in our respective rooms settling down for the night. We plan to revisit the beach on our way out of town tomorrow on the next leg of this trip that will find us in Crescent City. Should be an interesting arrival there because even though Diane received an email confirmation of her reservation, she received another email reporting that it had been cancelled for some obscure reason. Interesting. There will be more on that tomorrow.

Now some photos, some of which relate to other days. 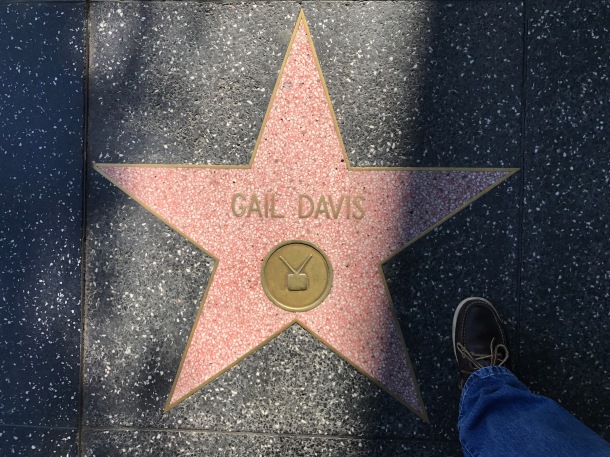 The girls, in the elevator, on the way back to the room after retrieving them from Universal Studios. I have no idea what they’re looking at.

End of a Rough day. 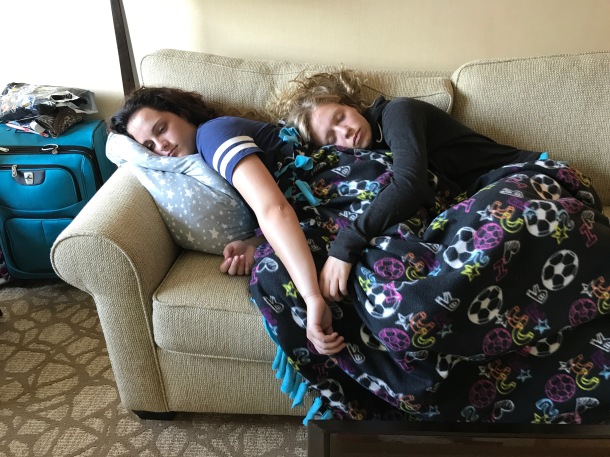 A puppy treat at one of the rest stops we chose to use. 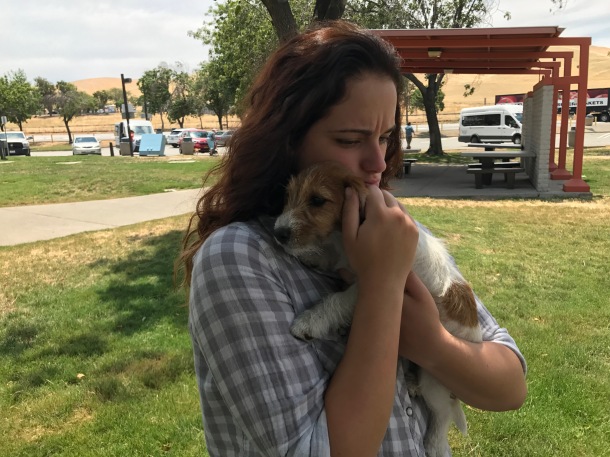 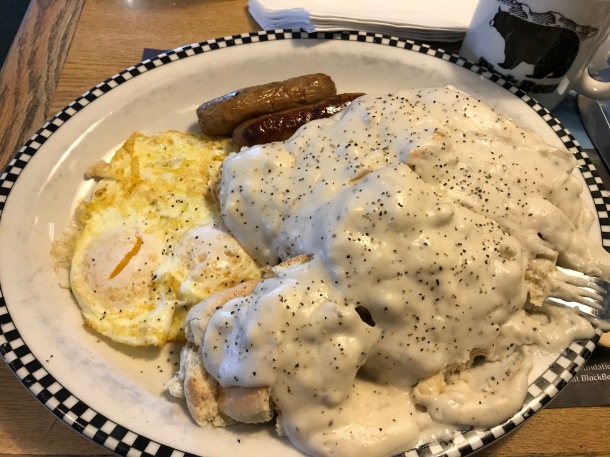 We got an education at this cafe. It’s located in Boonville, CA, out in the middle of about a zillion wineries. This is the place where inhabitants developed an entire language called Boontling which they used to confuse non-natives to the area. It is currently spoken by only about 100 residents. This restaurant is the location of choice for those folks to gather and share news. Interesting. 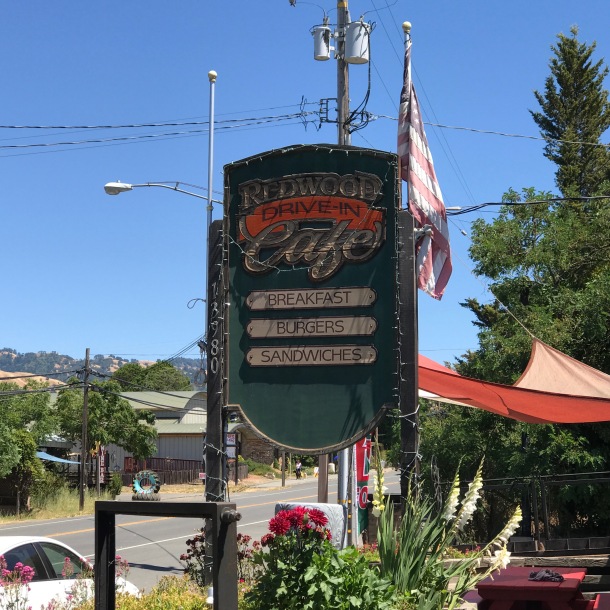 On our way to Glass Beach the girls found a squirrel that wasn’t afraid of them.

Lydia spent most of her time catching and harassing hermit crabs while the rest of us checked out the beach.

This is what Glass Beach looks like. Pretty awesome.

Even while standing on an awesome beach, folks gathered to watch Lydia catch crabs. This particular one was making it’s way toward Diane who was semi-sitting on the rock in about the place Lydia is working. 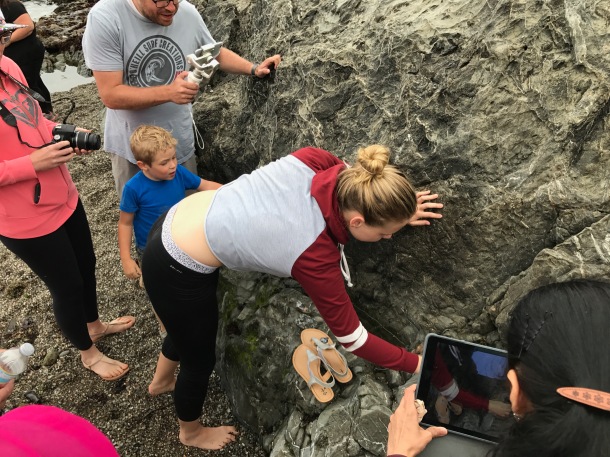 She finally captured it but we wouldn’t let her keep it. 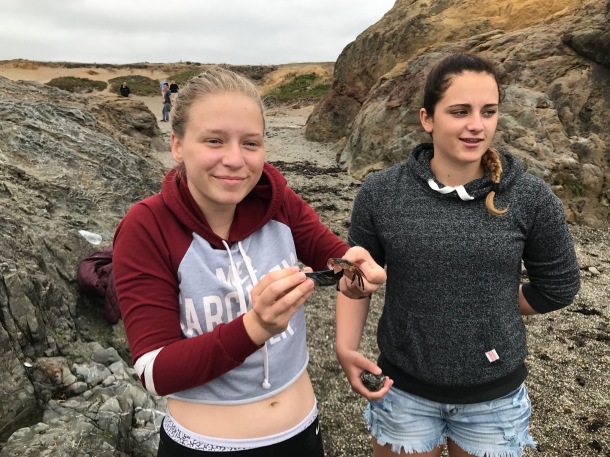 That’s Diane’s hand holding a handful of beach that I provided for her to display. 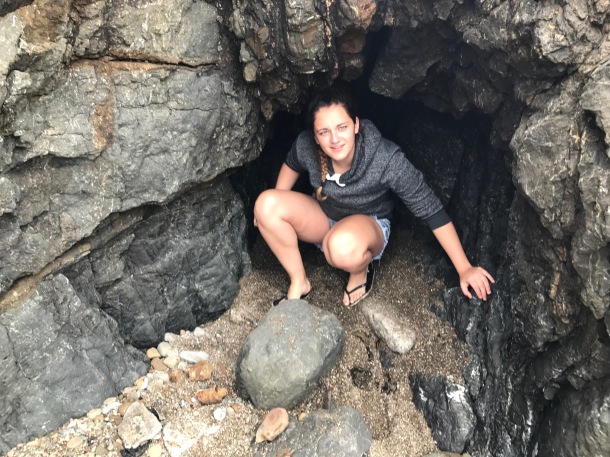