Days 4 thru 7 are so full of stuff, and I have lots of photos, that I’m going to break it up so you won’t get totally bored. That, and I have 47 photos to share that total 118 MB of data. Too much for one post. So, I’m going with Day 4 now.

That would be the day we finally arrived in Carlsbad and got checked in to our rooms. This time, instead of a three bedroom house, like we had at NAS Lemoore, we had a two bedroom condo. Well, actually, it’s a one bedroom condo with a studio adjoining. Perfect for the four of us. The girls had their own space with a bath, and we had ours. Yes, perfect.

Getting to the room from Lemoore, however, was a serious challenge because we made it a point to drive through Los Angeles so the girls could experience the traffic. They weren’t disappointed, but I’m sure they wish we’d chosen a speedier route. Yes, it was a dumb thing to do, but we only had to do it once, right? Right.

As it turned out, Diane gave up driving before we reached the infamous Grapevine over the hills into the LA area. So, I had the honor. What fun. Additionally, I wound up driving all the way to Carlsbad, a  v.e.r.y. s.l.o.w. t.r.i.p. Really. And, it took most of the day. No, it took all day. We arrived over two hours later than the original arrival time computed by our GPS lady before leaving Lemoore.

Once over the Grapevine, and into the city, the speed dropped to around 0-20 mph and that’s the way it was for the duration, all the way to Carlsbad. That’s a stretch of about 100 miles. It was brutal; 4-6 lanes (each way) of vehicles cruising along at a little over walking speed most of the time.

Our accommodations here at Marbrisa Resort are on the ground floor. The girls’ room has a small patio that is about 10 feet from the gate into the pool area, right next to the hot tub. Perfect, right? They certainly think so. They have four pools to play in.

Somewhere during that grueling day, we stopped for lunch at a Panda Express where I pigged out on a bunch of shrimp which resulted in this …

The dreaded Gout. It hurt, and I limped a lot, but it didn’t stop me from keeping up with the crowd. When we had a chance, we went to the commissary at Camp Pendleton and got the most horrible cherry juice in the world which Diane made me drink to help resolve the gout problem. I managed to gag down a glass but that was it. Nasty stuff, and I kinda used to like cherry juice. Next time I get gout I will just live with it until it’s gone.

Today is Wednesday. I’ll fill you in on Monday and Tuesday next. I’ll leave you with a photo of “my girls” waiting for a table at an eating establishment somewhere on the West Coast, South of Los Angeles. Might be the Green Dragon in Carlsbad.

Here’s what we ate … 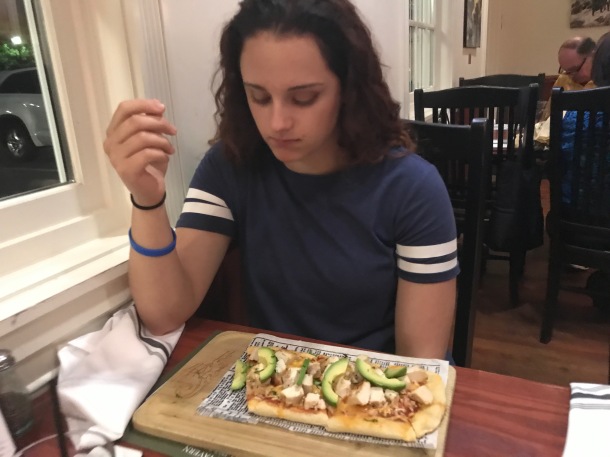 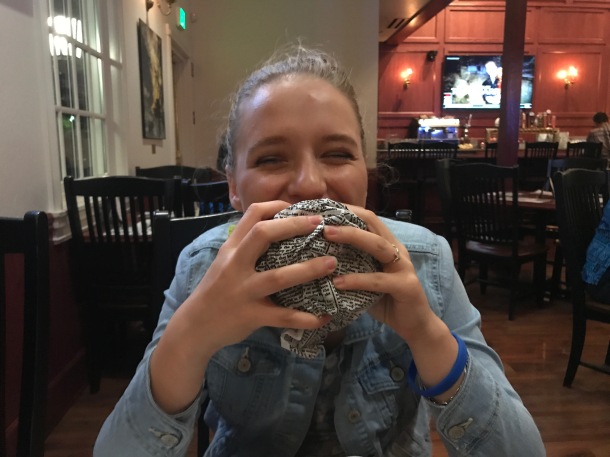