Before I get carried away here, I need to add something about my trip back to Best Buy to retrieve my old computer. You know, the one that broke? Well, when the Geek Guy tried to refund the $80 because they couldn’t find any data to transfer he ran into a problem that required help. I won’t bore you with the details, like normal, but will cut right to the chase. The problem he was having was that when he brought up the purchase Best Buy’s computers had reworked the totals because the computer I bought the day before was on sale that day. So, in addition to the $80 refund I got an extra $200 due to the reduced price. What a deal, don’t you think? It almost made me want to go out and buy something else that I could return. But, I didn’t. I counted my blessings and left happy.

Here’s another update on the computer problems. I may have mentioned that I had perfectly good back ups on a 4TB drive I used for that purpose, and that the failed computer, as it gasped for life, felt the need to inform that backup drive that it was leaving and that no more backups were in the works. As a matter of fact, it told the backup drive that the backups it had could be summarily dismissed. So, bowing to the superior knowledge of my Apple iMac computer, my 4TB Western Digital My Cloud drive somehow made all those back files just disappear. Stupid My Cloud. Why would it believe a dying computer?

But – the new computer, the replacement, could access the drive, but I wasn’t going to trust it for future backups. Nope. Not a chance. Instead I set up the new Seagate 1TB drive that I purchased for the Geek Guys to use for transferring data. It works great and it’s dedicated with a direct connect with a USB 3.0 connection. Also, since the new computer so easily found the My Cloud drive, it also was able to drill down to the ‘Jerrie’ folder where there just happened to be a “Documents” folder that still had all the documents I thought I’d lost. Literally hundreds of them including one folder that holds a bunch of short stories I’ve written over the years. Those files were there because I apparently had the foresight to manually copy them from the old computer before it started losing it’s memory.

Life is so much better now that I have my Documents back. Sadly, the other thing that would have come in really handy is the Key Chain file which held all the passwords for pretty much everything I access. I’m guessing I’ll survive without it, but I really like all those passwords. Some of them I’ve had for years.

Last Wednesday I attended my first Church Council meeting in a year. Prior to that year off I served on Council for six consecutive years. For some reason I agreed to return for another round of abuse and was at Wednesday’s meeting to see what was in store for me.

The main order of business was electing new officers. Before any nominations could be made I spoke up and volunteered to be the new Secretary. One of those going off council was the Secretary and I can take notes. And I can type. I did this to also eliminate any possibility that I might be nominated for a position that had responsibilities. The ploy worked and I avoided getting a real job. Lucky me.

On Thursday I skipped coffee with the guys at the Kozy because I needed to study for a mess of tests I was going to have at the Vestibular Lab at Good Sam. I’ve mentioned this previously, I think. It’s all about the body’s system that helps keep us vertical, and makes us spatially aware. It’s pretty important, I hear. The testing took 2.5 hours and I appeared to pass them all. In the end I left with the knowledge that mechanically I’m kind of OK, so whatever it is that’s making Jerrie almost fall down is probably something going haywire with my tiny little brain. The Doc didn’t actually say that, but there’s really not another option.

During the vestibular testing I learned some amazing things about what they test and how they interpret the results. Bottom line, these folks can perform their non-invasive tests on newborns and discern if the child has any kind of hearing impairment. Really. A newborn. That just blew my mind. They do it with puffs of air, clicking noises, water, and stick on monitor terminals. One of the tests that checks the ability of the Cochlear to convert sound waves into electrical impulses that can be interpreted by the brain. My doc said they used to do this by sticking a needle through the ear drum then used that needle to induce the needed sound waves. Thankfully, there’s a new toy in town that does the same work simply by sticking a ‘thing’ in the ear canal.

OK. Enough of that. I’ll learn more at some point in the future after Dr. Brown reviews the tests.

Yesterday was a long one. I mentioned that Ahmed, our Pakistani Grand Son, a foreign exchange student staying with our daughter, Jennifer, gave a stellar presentation at our last local Lion’s meeting. Because he did such a great job, he was invited to attend the Oregon Convention in McMinnville. It was an all day affair that required we leave home at 0630 in order to be there by 0800. One of the first things that happened during registration was we all received stick on mustaches. I’m sad that Diane didn’t wear hers for the photo. Nifty, huh? 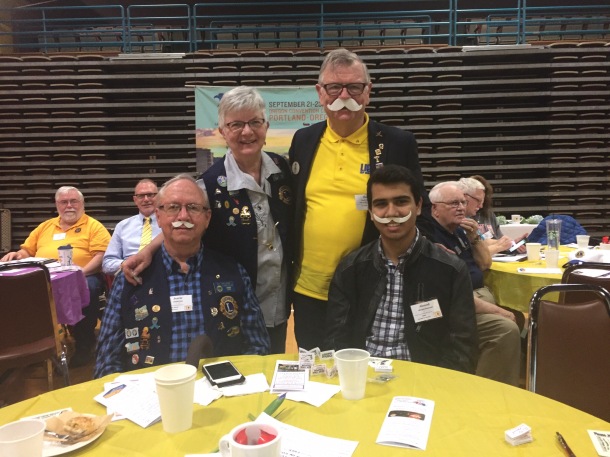 Many people spoke, some of them were very good, we had lunch, and we (Diane and I) voted for new officers for District 36-O. Another thing that happened was all the First Time convention attendees were forced to go to the front and stand in a row so folks could look at us. Hank captured us.

As the day wore into afternoon, and our time away from the house entered the danger zone for leaving the dogs alone for so long, we bid our adieus and headed out the door. We missed the entertainment, I hear, but we also got home before dark.

My Lion sponsor, and past District 36-O Governor, Hank, received an award. I got to document that. On the left is the Lion International Director, then Hank, and the current 36-O governor (the reason for the stick on mustaches). 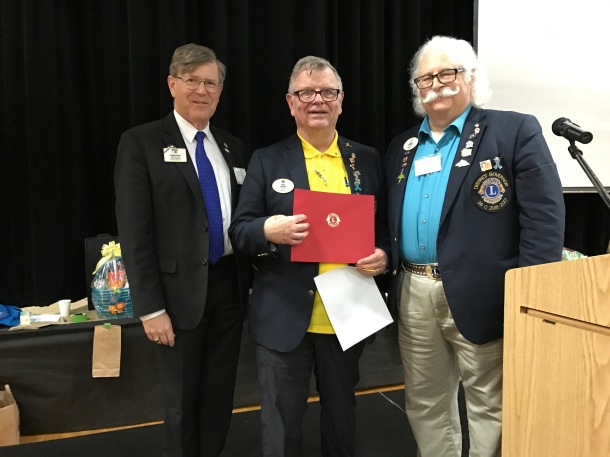 On the way to our vehicle Ahmed had to stop and get a photo with his new best friend who was sitting on a bench outside the facility.

Now, for som totally unrelated information that may or may not interest you. First is a photo of our youngest Grand Daughter, Jerrie Anne Diane, (my and Diane’s namesake) during a class event on Valentines Day. Jerrie is sitting on the floor in front of everyone. That’s my girl.

Next, and last, is a photo of popcorn we had the other day. Diane has become addicted to popcorn for her evening snack. Although it’s theater microwave popcorn, we put butter on it anyway – half a cube for a bag. Then it’s really good. Sadly. our microwave is losing it’s mind, probably because it was hanging out with my old computer during the night. Anyway, it cycles through all of it’s options, just for fun, while we sit in the living room. That wouldn’t be so bad except it beeps every time it changes something. Sometimes it gets really busy. We’ve been waiting for it to quit totally, but it still perks along. Even so, it seems to get confused with the ‘Popcorn’ button once in a while, popping the corn for only a portion of the allotted time at something other than full power. The result is a bag that only half popped. That happened the other night so Diane added some more time and just let it run until the popping stopped. Doing this pretty much fries all the corn that’s already popped. So, I popped her another bag which worked just great, and I ate the burned one. It wasn’t too bad.

That’s all I’ve got.