This morning started off with an alarm clock going off, not something we normally do on vacation. But, we had a bus to catch at 0830 so sleeping in until 9-10 wasn’t going to work. The bus was for a tour of Naval Station Norfolk.

The significant aspect of this trip for our group of former USS Cleveland (LPD-7) crew members is that 50 years ago this month those of us who were in the 1st crew were on the base to board the ship and take it to her home port in San Diego, via the Panama Canal.  So many changes have been made to the base over those 50 years that none of us could definitively say, “I remember that!” Nope, it was all new, and very, very different. It’s truly a new Navy.

The tour bus we rode is apparently a frequent visitor to the Naval Station because our tour guide, a Petty Officer 3rd Class, said he did tours with our bus driver about every other day.

Jack, the president of the Cleveland Reunion Association, has been to all of the reunions as you can see by the length of his name tag. Each row has the name of the reunion location for each year. There have been 19 of them. Diane and I have only been to about 5 of them, counting this one.

Our bus tour of the naval station took us by most of the piers but we weren’t allowed to take photos up close. Instead, the bus pulled over a safe distance away from the piers and people were allowed to stand in the open door to take pictures back at the USS George Bush. Can’t see much, but there it is. 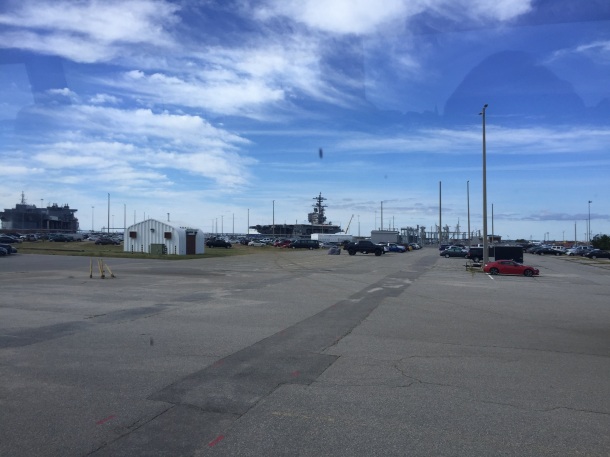 Before leaving the vicinity of the Naval Station we stopped by the NEX food court for lunch. Diane, Marsha, and I ate Panda Express. I’ve been craving Chinese food for a while and that just hit the spot for all of us. I ate far more than I should have.

After leaving the naval station the tour bus took us to downtown Norfolk and dropped us at Nauticus where we could tour the USS Wisconsin BB-64. They wanted lots of money to visit the ship so Diane and I chose to skip a trip aboard since we had recently visited the USS New Jersey BB-62. And, in past years we’ve been fortunate to visit the USS Alabama BB-60, and USS Missouri BB-63. That’s enough battleships for us. In our experience, once you’ve seen one battleship, you’ve seen them all. Still, there’s something special about going aboard one of those behemoths and walking those teak decks. This time, however, we chose to save the knees for another day. 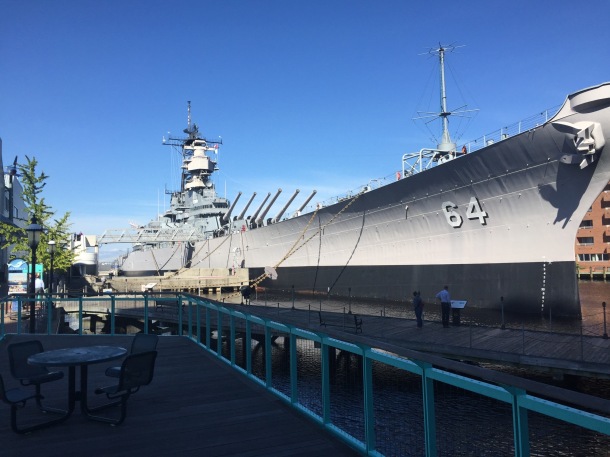 Another aspect of Nauticus is a Navy Museum which is free and we found it to be very interesting. Upon entry we were greeted by a gentleman in an authentic civil war naval uniform. He introduced himself as a LCDR whose name I can’t remember but his delivery was current tense as if were there. He was a wealth of knowledge regarding those times and it was a delight to talk with him. It was a new experience for us in a museum and we liked it.

The displays included this torpedo which was interesting just by itself.

Making it more interesting was the placard sitting by it.

This is Gary and Dan who were also aboard the USS Cleveland. I suppose you could tell that by the hats they’re wearing. Dan and I were part of the commissioning crew in 1966 and Gary was aboard some time after that. Notice that I lined this up so you could see the mermaid between them. An intentional photo bomb.

This one adds Cindy to the mix. She’s Gary’s significant other and one of our favorite people. 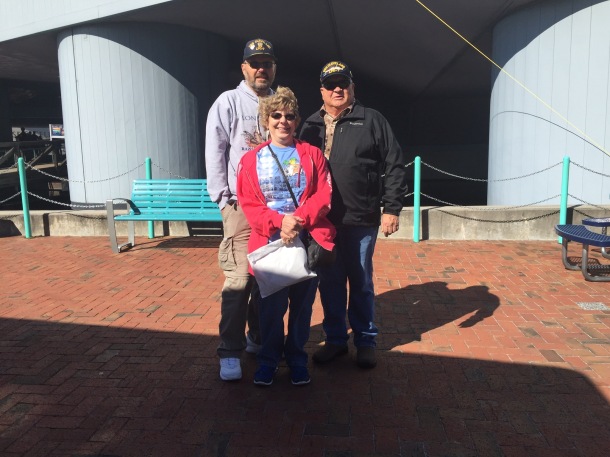 At the end of the tour we all retired to our rooms. Diane and I promptly fell asleep and didn’t wake up until around 6 pm. By then we felt the need to refill some of the depleted food storage units but didn’t want to go out for another meal. We were told that the flounder in the resident eatery was pretty good, but that didn’t appeal, either. So, we discovered where the nearest Food Lion was and went shopping for simple things to tide us over for the weekend for breakfast and supper needs.

Both Diane and I are tired of traveling and look forward to getting home next week. Even if it’s going to be stormy and wet. We watched the videos on the weather channel of the tornado that hit Manzanita today. Nasty. Still, we will be glad to get home.

Maybe we’re getting too old for these long trips.