Although we only visited two places today, it took a lot of time. We we’re on our feet far longer than they wanted us to be on them. Same for knees and hips.

We left our room around 8:30 am and drove directly to the Anacostia METRO station. It really is only 10 minutes away. The parking facility is enormous. So enormous, as a matter of fact, that we had to park twice. Diane parked the first time and I parked the second time. The second parking was to take advantage of the handicap parking spots that are free if you have the handy-dandy card to display. Diane brought hers, so we had it. Using it also got us much closer to the METRO entrance.

Down we went, into the deep dark tunnel … 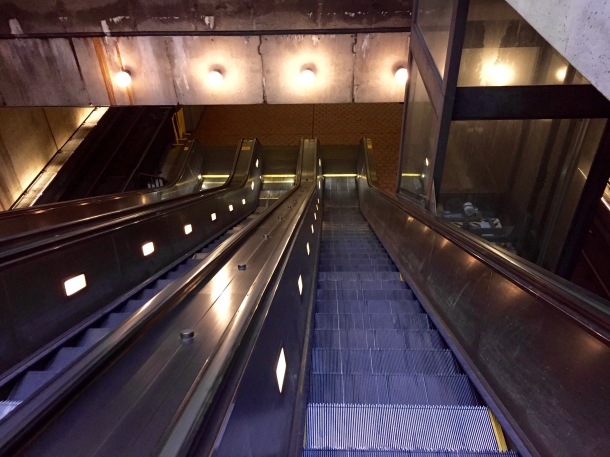 … where we sought a seat in the crowded waiting area … 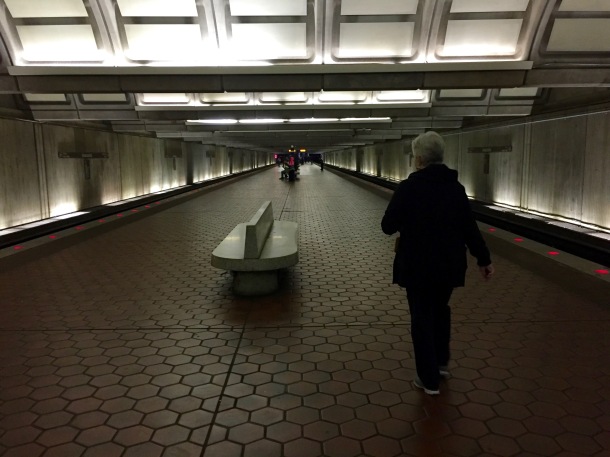 … until, finally, one of those 600 foot trains zoomed in for a landing. They come in so fast you wonder how they can possibly stop before reaching the end of the platform. But, they always do.

We boarded and set McPherson Square as our final stop. This required us to switch from the Green line to either the Blue, Orange, or Silver line.  It wasn’t actually very difficult but we made it so. Turns out it’s really good to know which side of the track to wait on for the car you want. Thankfully, there are lots of folks around who can answer those questions. Everyone was very kind. It pays to have gray hair.

I was surprised to discover that the McPherson Square station disgorged passengers from beneath this well known facility.

Since we were early for our assigned tour time, we chose to find a likely place to get a bite to eat. Not knowing anything about the area I approached a heavily armed Secret Service agent standing guard by a door into the US Treasury Department and asked if he knew where my friend Jim O’Neal eats when he’s in DC. He said “Absolutely,” and pointed across the street at The Old Ebbitt Grill. 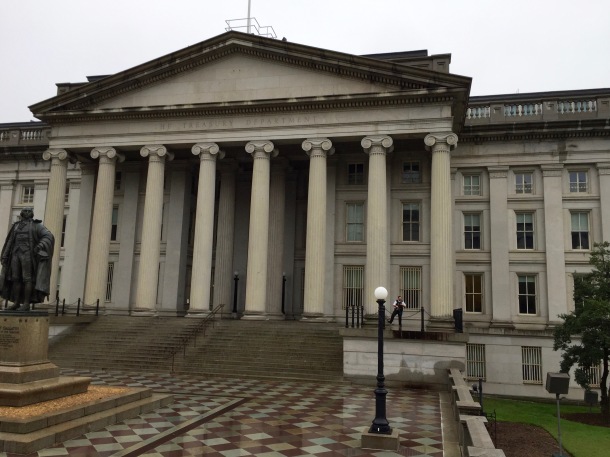 Here he is again, in case you missed him the first time.

We made our way across the street without mishap and joined the throngs of people attempting to gain entry. Surprisingly, since there were only the two of us, we were promptly seated and served. Diane suggest that we share a frittata and move along on down the road. It was a good choice. It was absolutely the best frittata I’ve ever had. It was also the only frittata I’ve ever had and it was delicious. I’m going to buy whatever kind of pan they used to make so I can do it at home. For some odd reason, I failed to take a photo of the food. I always take photos of the food. Except this time. Just trust me, it was really, really good. I’m sure Jim would agree.

From The Ebbitt we hoofed our way down to the spot where vetted tourist are allowed to enter the White House. Turns out there are hundreds of folks who get approved to visit the White House every day and they keep the Secret Service agents busy checking IDs against their lists.

That was the first check. There were two more before we were allowed into the White House area, then there we were. 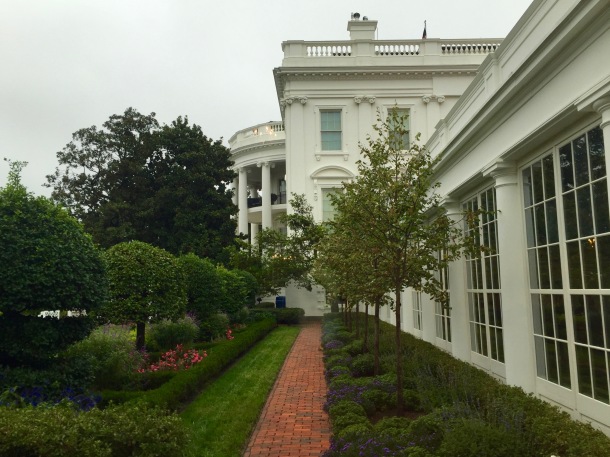 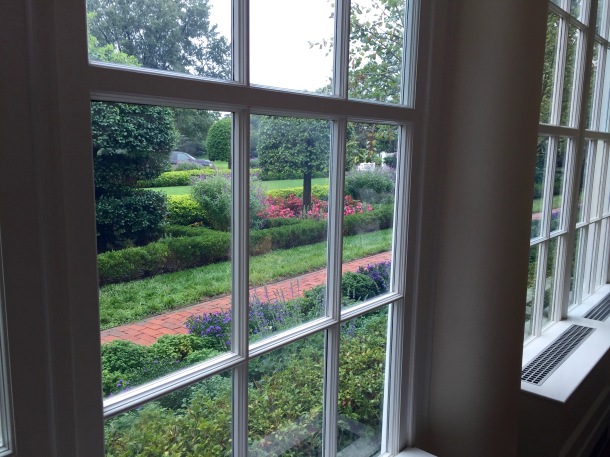 This was Diane’s favorite. Mine, too, I must admit. It is most definitely a Green room unlike the Blue room …

… that is most definitely not Blue. But, it has a pretty light fixture.

The Red room was a close 2nd to the Green room. 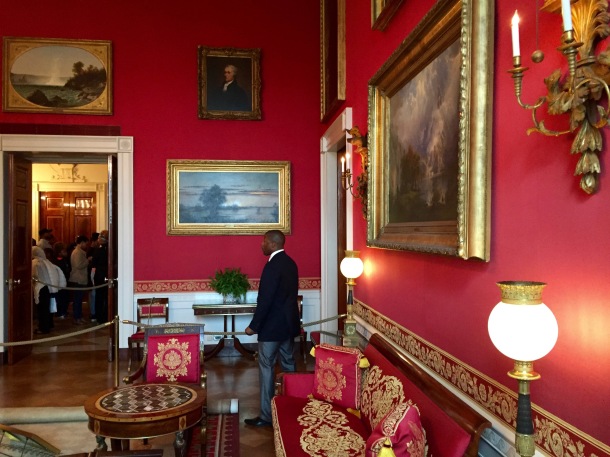 The dining room. Nice table, but I think the room would better represent America if none of the chairs matched, don’t you?

The guys with guns wouldn’t let me go up those stairs.

Then, all the sudden, we were back out side in the misty, humid air. 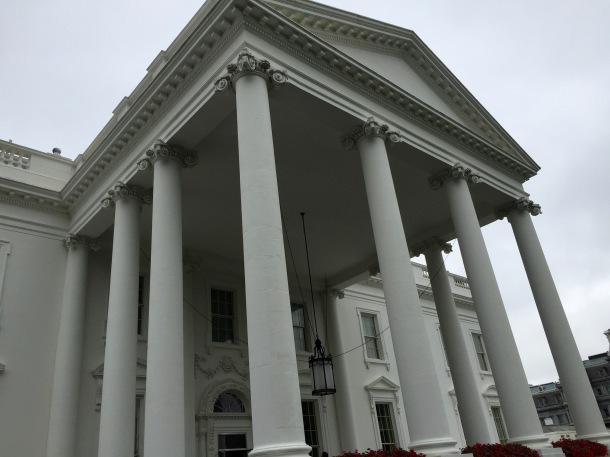 As we departed down the driveway I spied this Secret Service agent conferring with another one. Having a bad ass like this on my side gives me goose bumps. He’s the only agent I saw that was dressed totally in black. All the others had white shirts under their vests. I figure this gentleman must be one of the stealth versions. 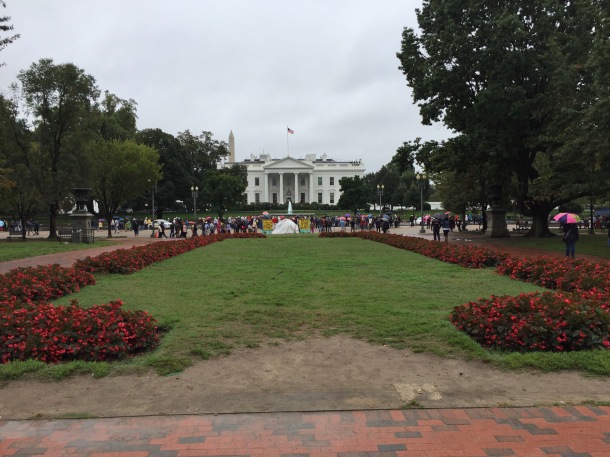 After walking a fair distance away from the White House, we chose to sit for a few minutes to admire the view. It’s really a nice one from this perspective. Then there comes the moment when you must look down, like all old people do, to make sure of your footing, that you don’t step in a hole, or a wobbly brick, and encounter this …

People are basically pigs, I believe. It’s beyond most of them to spend just a little bit of time to police the areas they inhabit, cleaning up the mess they made. We found this especially true when standing in the long line, waiting to gain entrance. I have to add, however, that we didn’t see very many garbage receptacles around town. But, that doesn’t excuse people from not caring enough to find one.

We’d heard on the news that there was a rat problem in the city and leaders were working on a solution to control them. Looks like something controlled this little guy. Had Diane not warned me, I’d have stepped right smack on him. It appears as though he’s been posed equidistant between the two grey bricks. This photo was taken as we stepped into Lafayette Park and both of us found it very interesting that  no one found a need to pick  remove it.

Perhaps one of these little guys is a serial rat killer 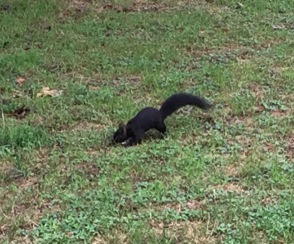 After conferring for a bit, limping on our tired old legs, and sore hips and knees, we decided to go visit the Holocaust Museum. This was one of the incredible views we encountered on the way. 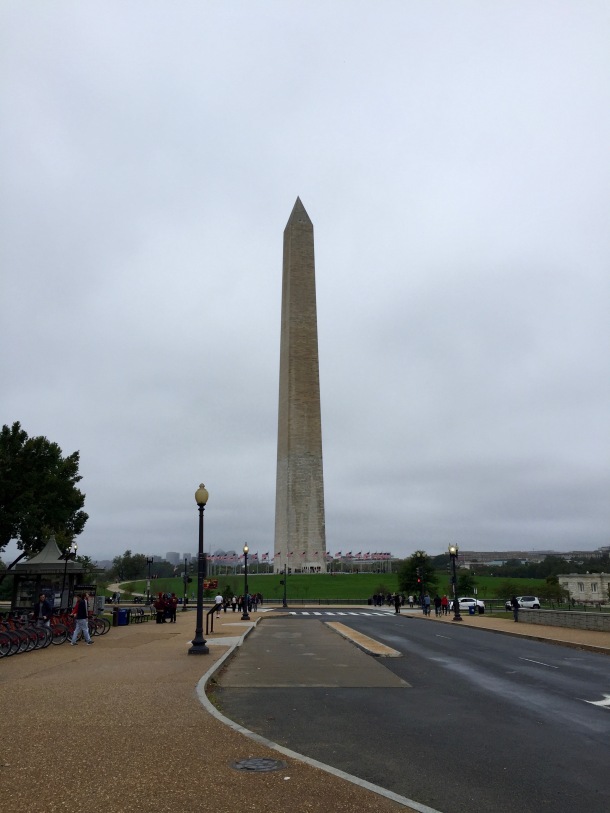 If you haven’t visited the Holocaust Museum, you should. Especially those who are convinced that it never happened. It’s a very sad tribute to some very brave people who were victimized by a delusional world leader. Diane cried during most of our trip through the displays, and movies, but is glad she endured. There were many displays she couldn’t bring herself to view so we passed those by. It’s very graphic throughout and I didn’t take any photos of the displays. It just didn’t strike me as the right thing to do. I didn’t however, take some photos of the serene chapel at the end where people could reflect on what they’d seen in a very calm atmosphere. It was a good ending to a very sad story. 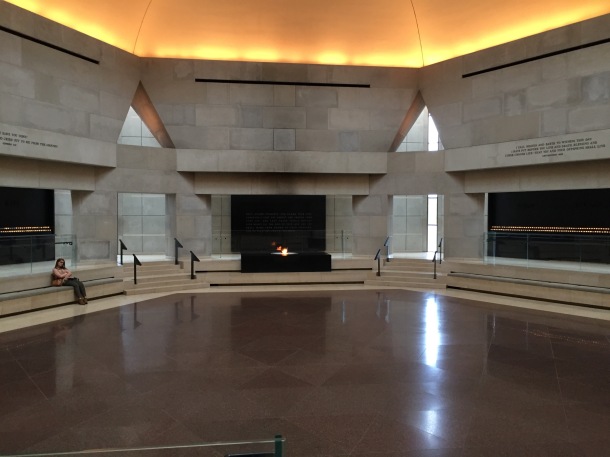 The sign on the wall outside the museum was a good reminder for those who entered.

When we finally rejoined the world it was late. We’d spent almost 3 hours in the museum. Thankfully, there were padded benches throughout where we could sit and rest a bit while trying to comprehend the atrocities that were on display all around us.

We decided to call it a day and head back to JBAB and our room. On the way we stopped at the base commissary so I could get an onion and another case of water. Water because we’d run out, an onion so I could make some proper tuna salad for our evening sandwich supper

By 8:30 pm we were both nodding off so doused the lights and called it a day. A good day. Tomorrow we’re just going to drive around looking at “stuff” and not use the METRO. Arlington Cemetery is high on the list.