Today a gastro doctor shoved a TV camera up butt and took a bunch of photos. I was going to share them, but Diane cautioned me against that saying it probably wasn’t a good idea. I tried to share it with the entire family at dinner this afternoon, too, but that was deemed inappropriate. In retrospect, I can see how that might upset some folks and probably shouldn’t have done that. But, I did, and must suffer the consequences.

The reason everyone was at our house for dinner was to celebrate Lydia’s 15th birthday. It’s really not until Wednesday the 26th, but we celebrated early to trick her. It didn’t work, but that’s OK because everyone had a good time. Like normal, everyone talked at once so the only conversation any of us could participate in was with the person next to us, or we could just sit and listen to the loudest one. It’s very entertaining, and it wears me out. Still, it’s good fun.

Diane cooked dead chicken, Lydia’s request, and it was great. It was oven-fried. We also had asparagus, corn, baked potatoes, salad, and rolls. This is the first real meal I’ve had since Friday … but I’m getting ahead of myself a little …

It was a brutal weekend.

I already told you about Saturday, which wasn’t really too bad, but Sunday was liquids only day. I drank chicken broth, water, and had jello for dessert. This was repeated over and over throughout the day until about 1900 when all eating had to cease. I ate an entire package of jello by myself. It was orange, not one of the colors frowned upon by gastroenterologists. Those are the purple, blue, and red ones. The day ended at 1600 when I washed down two Dulcolax tablets. The tablets are very small so it was like two little periods punctuating the end of my liquid intake until 1700. Then I got to drink a 10 oz bottle of Magnesium Citrate, a new taste treat for me. It was pretty much the most horrible tasting stuff I’ve ever had. Truly, it was. I was given 30 minutes to get it all down, and I used every second of it. There were no consequences listed for going over the allotted 30 minutes, but I wasn’t about to find out. Doctor’s orders, you know.

Next on the list was Gatorade, into which Diane had already added the Miralax. This started at 1800 and I was required to ingest 32 oz, through a straw, 8 oz every 15-20 minutes. After the citrate stuff, the Gatorade tasted pretty darn good, even though it was served at room temperature. I was given the option, earlier in the day, to have it refrigerated, but didn’t think it would matter. Not being a Gatorade fan, I’ve made a determination that the colder it is, the better.

Knowing I’d just ingested a potentially volatile combination of laxatives, I put on my quick release pajamas and positioned myself where I had a clear shot at one of our bathrooms. The whole event turned out to be quite anticlimactic because nothing exciting happened. I was in control the entire evening, then went to bed and slept soundly for 6 hours before it was necessary to arise and finish off the remaining 32 oz of Gatorade laced with Miralax.

I had to get up at 0630 this morning to finish off the mixture. Since that batch spent the night in the refrigerator, it was nice and cold which produced my determination mentioned above. Being cold, and the only thing I was allowed to ingest, through a straw, 8 oz at a time, I pretended it was better than it really was. After it was gone, I did my best to get some more rest on the couch. There were some restful moments, but Panzee and Breezie took turns going outside. Until Breezie figured out that beating on the glass got someone’s attention, it was easy to ignore her and I could rest longer. Then Panzee started doing it, too.

At 1015 Diane made sure I was up so I could be dressed in time for our 1030 launch to make it to the gastro place by 1130, my designated check-in time. The procedure was going to take at least 2 hours so I shooed Diane away to go do something a little more interesting than sitting around in the waiting room for me. The nurse took her phone number so she could call her back for my ride home.

Shortly after Diane left, I was called to the back room where all the magic happens.

I was escorted to my very own little bed, separated from a lot of other beds just like it by curtains. On the bed was a pad onto which I was told to sit, by Joann, who asked me a ton of very personal questions which I answered correctly. I was pretty sure they were all correct, anyway, because she didn’t scold me or give me “that look” that makes you want to rethink your answer. One thing that concerned her was that I was put on a laxative regimen different from the one ordered by the doctor. The one I should have done was considered to be a little easier on the kidneys than the one I was told to do. I was told it was an easy mistake to make because the little boxes that needed to be checked, for each process, were right next to each other. That eased my mind considerably because I was sure all the other boxes had proper separation to disallow the probability of getting the wrong one.

After the questions, she told me to strip and put on the backless gown. Not wanting to get on her bad side, I proceeded, but she said I could wait until she left. She did, and discreetly pulled the curtain across the end of the bed giving me a small feeling of privacy. I folded all my clothes up and stuffed them into the locker provided, and put on the gown. Then I took it off, put my clothes back on, and went to the bathroom for the last time. Then I repeated the stripping part.

Once properly donned in the gown, and my socks, I reclined on the bed and covered up with the sheet, as directed. Shortly thereafter, Joann came back with a tray on which I knew were things that would hurt me, but I remained brave. Of main concern was the IV she had to install.

Her first attempt in my wrist area failed so she had to try again. Being dehydrated like I was, didn’t help the situation and I understood that so felt no animosity toward her. I didn’t tell her, however, that I only scream on the third try. She laughed, thinking it was a joke, which was OK. It put her in a good frame of mind and helped her, I’m sure, get the second attempt properly installed a little further up my arm.

After a short wait, I was wheeled away, deeper into the building where the REAL fun happens. Once in my designated room I was greeted by Devon, my anesthesiologist. He asked a few questions, then explained that he would be administering propofol, one of the drugs used on Michael Jackson. This didn’t bother me, however, because I was in a medical environment full of ethical practitioners. I was going to be just fine and I wouldn’t remember anything that happened.

Once Dr. Sleven appeared, he who would control the procedure, Devon approached and said, “here we go,” and attached a syringe to my IV port. He squeezed a little in and said I’d feel the effect right away and be out in 15 seconds. The feeling was quite interesting because I had the sensation of dull needles pushing on all surfaces of my body, felt myself drift a little … then I woke up back in my little curtained off area in the prep room about an hour later. Interestingly, I dreamed during the procedure, but don’t remember what about.

The effects of the drug dissipated quickly and I was back to normal in about 10 minutes. I guess that’s a subjective term, “normal”, but I felt pretty good. A different nurse appeared to remove the IV and got me some juice, then I was allowed to dress and retire to the waiting room. Just as I sat down, Diane walked in. Perfect timing. Shortly afterward, Dr. Sleven called me back to discuss what he discovered on his trip up my rectum.

The news was good, but he put me on another 5 year recall, instead of 10, because he found one polyp which he removed. He didn’t think it was a problem, but it will still be biopsied. He gave me an entire page with photos of various parts of my colon which I might frame and hang on the wall to enjoy. It could be a topic of conversation. But, I won’t do that because I know it wouldn’t be a good idea. I’d share them, because I think they are pretty typical, but won’t because I don’t wish to anger my leader. Besides, it should be a private thing, right?

As soon as we got home from the hospital, Diane started cooking everything in sight in preparation for Lydia’s BD dinner. It was a festive time, as previously reported. All the kids are growing up so quickly. Lydia’s going to be 15, next month Jeran will be 14, and Cedric will be 17 in June. Where does the time go.

Lydia and her cake … 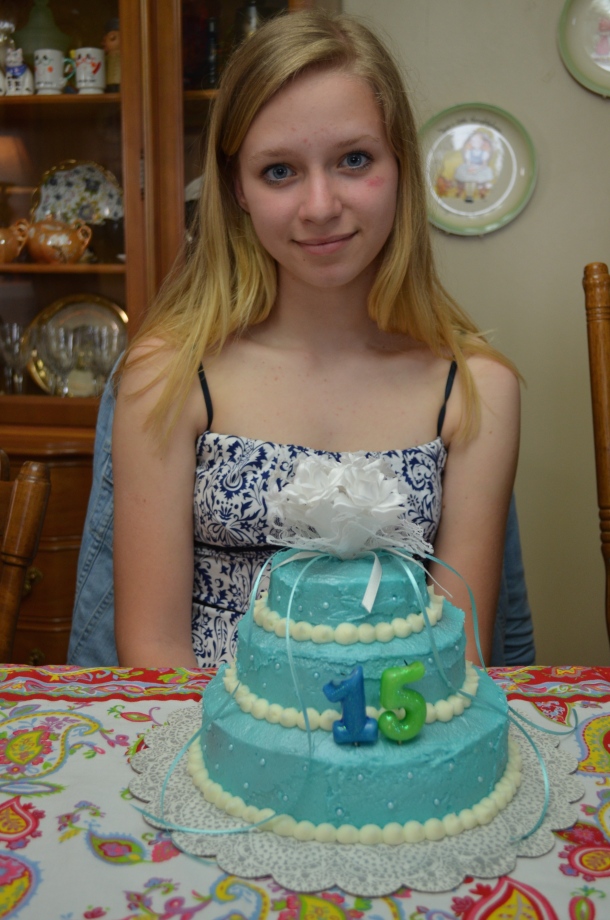 Lydia and Gilligan hamming it up for the camera … 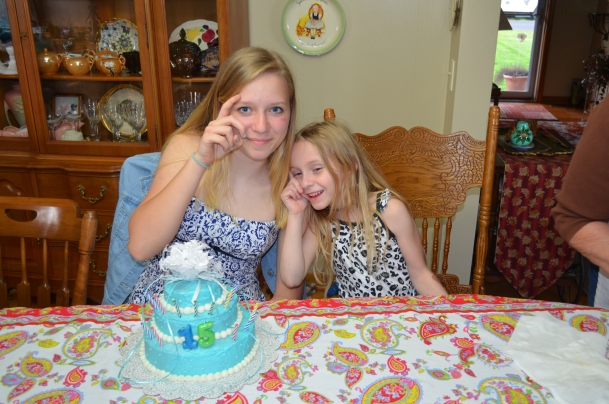 Gilligan inserting a little of her inner self, and a glimpse of the future “Rocker” … 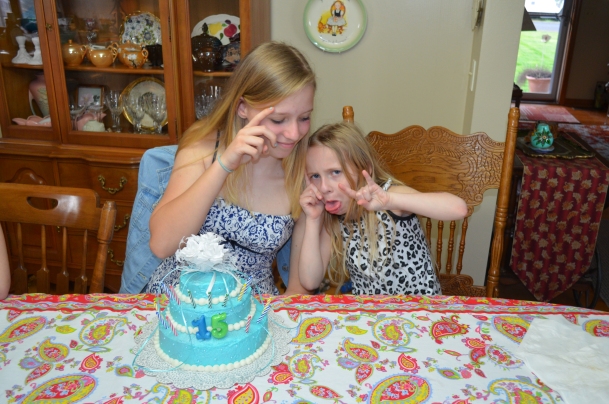 Baylee’s and Gilligan’s ride. This was as they were leaving. We got a report later that the trailer was rolled when they were almost home, but damage was minimal. 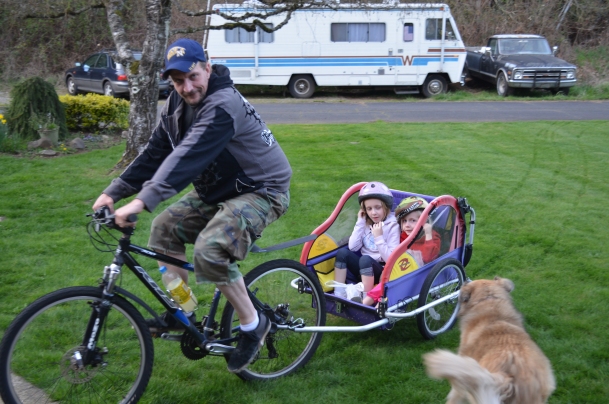 One thought on “My Rectum, and Dead Chicken Parts”