At this exact point in time it is right at 1520 which is only a two hours difference from home which was erroneously reported as a 3-hour difference just recently. I think I got that from the pilot of the plane we rode in on. That, or I just took a guess. Since I’ve corrected that terrible miscalculation it’s a moot point so you may summarily dismiss any further references to time, in general.

I point out the time because I’m still in the bathrobe provided by the resort. We have been trapped in our room all day by horrendous weather, on the parking lot side, and noisy golf carts whizzing past on the lanai side. That’s a lie, of course. Just didn’t want it to get out that I’m still in my robe because Diane just got up about 30 minutes ago. It was a long night for her … too much beef over the past two days, we think. 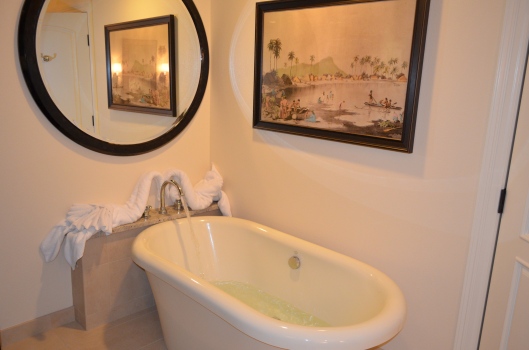 When she’s all softened up, I will take my shower, then we will forage for
food that will be more gentle to our picky innards …

I am compelled to share with you that they have incredible water pressure here. That tub filled in about 1.5 minutes. Seriously. Well, maybe 2.5, but that’s still fast.

Here’s the view from our lanai … 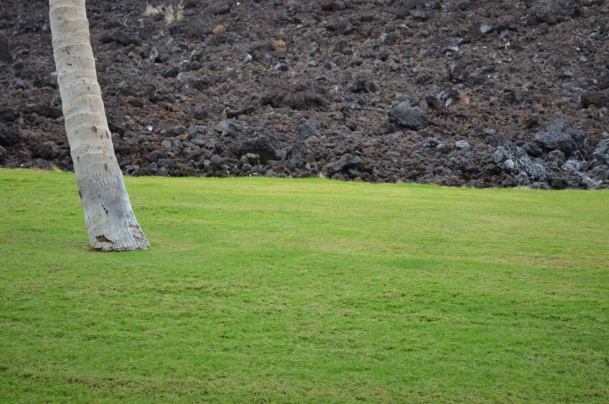 As you can see, we’re pretty close to the volcano. Some of those rocks are still hot, but not too hot for the weasels, or ferrets, that habitat the resort. I suspect they don’t pay dues like everyone else here, but no one seems to mind.

Here’s another view from our lanai, if you zoom out and look up a little …

Just to keep you abreast of what’s going on, it’s now 1555 and I’m going to take my shower while Diane recovers from her bath.

It’s much later now, after 1900, actually, and we actually got out of the room for a little while. Diane got up feeling lots better, and she was hungry, a good sign. This time the desire was something more in the “comfort food” area, like eggs. Those are our go-to choice when nothing else appeals. They’re just really good.

To get them, considering it was 1700-ish at the time, we had a couple of choices. We could revisit the Farm Market at the Mauna Whatsit resort next door, or take a short trip to Waikaloa Village, a short jaunt up the hill where the temp is only 73 instead of 76 where we currently ‘live’. We know that’s true because our rental car has a thermometer that told us. OK, it didn’t actually ‘tell’ us, it ‘showed’ us. On the dash, in a place I’m not allowed to look because, although I’m the registered driver of the vehicle, and Diane is secondary, and she’s semi-ill, I’m still not allowed to drive. I think  that’s just wrong in a variety of ways, but it’s best, for me, to not attempt to push the boundary of my God-given rights as a man to rule the roost. As the ‘King’ of my abode, I am simply a figurehead, as are almost all good married men (GMM).

It rained at some point during the day, but only lightly because I didn’t see anything coming down any of the six or seven times I looked outside. It also rain on our trip to Waikaloa Village, but barely enough to need the wipers. Diane used them anyway for two reasons: 1) The windshield was dirty, and 2) She just wanted to see how they worked. From my secure spot in the passenger seat, I felt more qualified to investigate  how to activate the windshield sprayers to aid in getting the windshield clean and to help allow Diane to keep both hands on the steering wheel and looking at the road. Why take chances, right?

The trip was uneventful and we found the market just fine, did our shopping and made it back to the car for under $65. All we got were 2 yogurts, 6 bananas, frozen lasagna, a dozen eggs, loaf of bread, 1/2 # of butter, salt & pepper, small strawberry jelly, small can of soup, small brick of cheese, and a box of crackers. Oh, and two bottles of mineral water for an ailing tummy. Bread was an absolute bargain at $2.50. At the neighboring resort it’s $5 a loaf.

Tomorrow we’re either going to Safeway, or Costco. First, however, we’re going to Kua Bay and look for whales. Honest. I know, I said we were going to do that today and it didn’t happen so why am I so sure it will happen tomorrow? I just know, OK. And, I told Diane it would be awful if I had to go alone. So, sick or not, she’s bound to go, and she’ll insist of driving. She feels terrible, by the way, for feeling ill, like it’s something she can control. I am not, however, concerned about any inconvenience on my part because I am a GMM. Just ask her.

Tomorrow we will investigate paradise.

We will also make plans to connect with Jewel. By the way, for those who are interested, Friday is Jewel’s birthday. On that day she will officially be a lot older than me.

Diane just texted me from the bedroom, where she’s watching “The Bachelor”, requesting some more mineral water and a small scoop of sherbet. Oh, ya. We bought sherbet. Frozen peas, too. I think that’s all.

I had some sherbet, too.