Just a quick nod to JB, then I’ll get on to something worthy of discussion …

In my humble opinion this kid is an over rated human who needs to be deported back to Canada.

Let them deal with him.

Now for important “stuff” … Golf, and pretty much anything else than JB!

That’s what I did today with Doug, Junior, and Lyle. This Lyle is our local American Legion Commander and he’s commonly called “chief” because of his American Indian heritage. “Why,” you may ask, “does he allow people to call him that? I mean, think of the demeaning nature of being called ‘Chief’! How awful is that?” Well, bottom line is he’s perfectly OK with it. He’s responded to that name most of his life and he even writes that on his golf balls. Anyone who finds one knows the owner and returns it. Except for me. I keep them.

We all golfed pretty good, too. I even parred a hole, and had a couple of respectable bogeys. Nifty. Doug chipped in for a birdie on one hole and wound up beating me by 10 strokes. That’s not a difficult feat for him. I’ve discovered that I actually get better scores since I started counting all my strokes, as I go, instead of trying to remember after I’m done with a hole. what a difference. 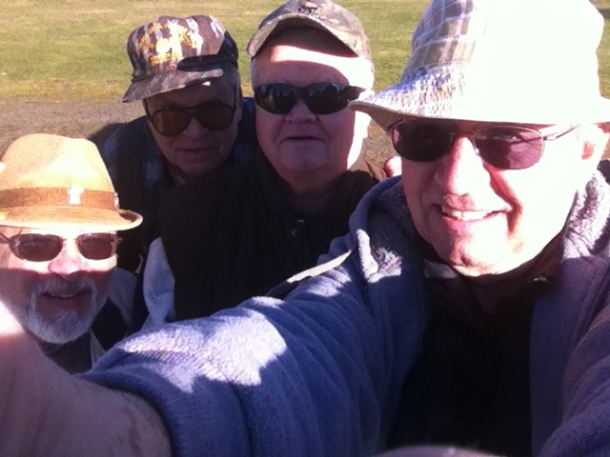 Here’s Junior teeing off on the third hole … 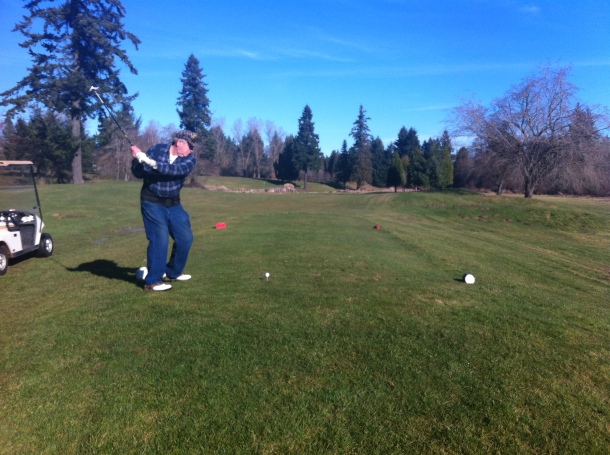 After finishing our game, we went to Fultano’s, in Scappoose, where Doug & Junior’s older brother, Jerry, and my older brother, Jack, joined us for a nutritious serving of salad for everyone but me. I also had pizza. Five pieces. And 1.5 large cokes. It was very filling.

Then I went home for a very brief time, then Diane and I returned to our church, Bethany Lutheran, where our plan was to make copies of the Annual Report we will need for Sunday. Sadly, I left the file I needed to copy at home. So we returned to get it. Then, back to church to deal with a copier always thinks it needs new parts, which it doesn’t, and it stops working when it gets too hot, which it did after only 17 of the 50 copies I was looking for. So, we packed up and went back home. Again.

I took the original file, scanned it to my computer to make a PDF file, then started printing the 33 copies we still needed. So far, as of this moment, I’ve done 15 of them.    I would have had more, but while sitting here, watching TV, my printer over ran and spit three whole copies on the floor. They had to be collated, which took time because the paper covered about a 4 foot square area and didn’t really land in order.

On a lighter note, here’s Lydia in her Winter Ball uniform …

I find it interesting that she’s going to the Scappoose High School Winter Ball with a junior. I find that deplorable because when Diane was a freshman I was a senior. Lydia should have shot a little higher. But, her date, Wayne, is reportedly a good guy and he’s 6’3″ tall, able to provide ample protection should the need arise. He’s Cedric’s friend from church youth group. She will have a great time.

Now, I must quit, and make more copies.