Greetings to you all from the middle of nowhere, on the outskirts of Vernonia.

Camping is going well, but the temperature soared to about 105 degrees today. A good time to be on the interior of anything that has a working air conditioner. Since Diane took me to my VA physical therapy this morning, A/C for us wasn’t an issue. But it was for the tent campers, with whom we share our space, who suffered the brunt of the heat. They went for a ride in their car to escape it while we were gone, but Oz was trapped in the RV with just a fan running. So, we talked the tent dwellers through an emergency start of the A/C system so Ozzie would be comfortable in our absence. The tent dwellers took advantage of this new turn of events and stayed inside with Ozzie to ensure he was getting the full benefit of the A/C’s blissful cooling nature. It was a benefit to all of them.

After my physical therapy appointment, to address my persistent, crippling hip and leg pain. The therapist, Jed, was a new one and was assisted by Rebecca, who is attending Boston College and is doing her PT internship at the Portland VA Hospital. Whew! Jed is therapist who concentrates on bones, not just muscles, and he fixed me up and I walked out of there without limping. I was so amazed that we went to Elmers to celebrate by having breakfast. We had pancakes & eggs with Bacon (Diane) and Sausage (me). Diane’s bacon wasn’t cooked long enough so we brought it home. When cooking bacon for Diane, one must test it by holding it approximately 6 inches above a clean plate, and dropping it. If it just lands, without fanfare, it’s not cooked enough. If it shatters like a plate glass window, it’s just right. She didn’t send it back. We put it in a box and brought it back to the camp ground.

On the way, we stopped at the Fred Meyers located at the intersection of Highway 26 and Cornelius Pass Road. It’s a bigun. All I was after was earplugs for Jennifer so she could sleep because Daniel sleeps very loudly.

When we returned to the campground, we sat in the incredible heat for a very short while, then piled into the buick for a ride to a park by the Nehalem River in Vernonia so the boys could get wet. They did that while the rest of us sat in the sweltering heat by the river. Granted, we had an option to get into the river, but declined. Instead I, personally, napped in my chair. When I awoke the shade was gone and the sun shined brightly on the exposed parts of my tender body. It made me sweat. A lot. Panzee accompanied us and also found it necessary to take one step too many and fell into the river. Then she stood in front of everyone and shook it all off. Quite amusing.

Finally, after Jeran finished his marathon swim about 100 yards down the middle of the placid river, we returned to the campground to release Ozzie from his nice air conditioned motor home. 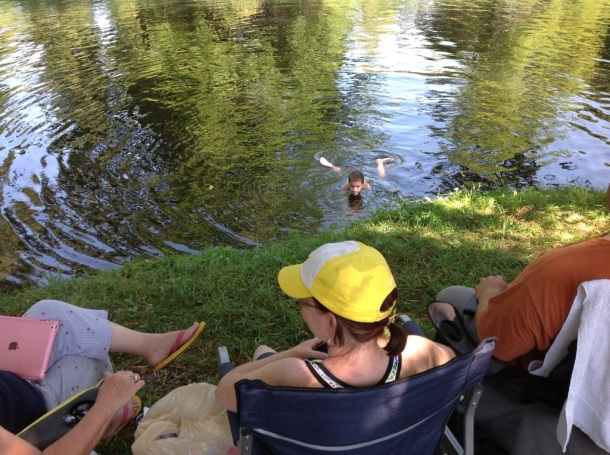 All that riding caused my hip/leg pain to return with the added benefit of gout in my left big toe. Nice. After the adults watched me walking around, trying to figure out which leg to limp on, I was given permission to sit for a little while before being forced back up to cook supper. We had hamburgers with all the trimmings. Since I forgot the little BBQ grill, I used our electric Griddler which worked just fine. During this evolution I had to remain standing until everyone had eaten before I was allowed to sit and eat.

Now I’m fed and Diane did all the dishes. In all honesty, she did all the prep work for supper, too. I just cooked the meat which wasn’t a big deal at all. I just sat in a chair and watched the Griddler do it’s thing.

It’s 8 pm and finally cooling off a little. I may survive after all. Most everyone is sitting around the campfire waiting for it to ignite. I’m not sure that’s going to happen. 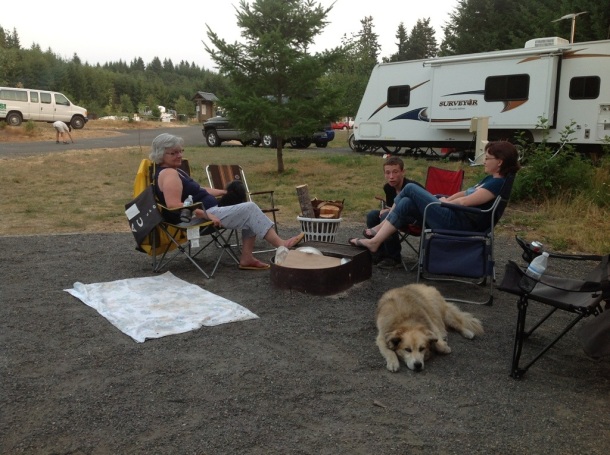