gotta feed the dogs and cat.

Lay down for another snooze,

can not get enough of that.

get a little blogging in.

Gotta let the dogs back in.

Then it’s time for lunch, and then,

I wonder what I’m doing here,

typing drivel with a slur.

It’s odd that words can mean so much,

but lose their punch with just a blur

too fast to think what I should “say”,

So I stop to take a break,

some folks think I’m such a flake

And I should be …

OK – that’s enough of that! I’m not a poet, obviously, so I quit and went outside to clean up the hot tub so Diane can use it. I had to wait for the company to leave before doing it because they might have waned to use it. This is what I saw …

I know, it needs some paint to cover up whatever it was that got splattered around down there, but it’s clean. I vacuumed it then power washed it as well as the tub innards. Diane couldn’t see this from the upper deck … she saw this … 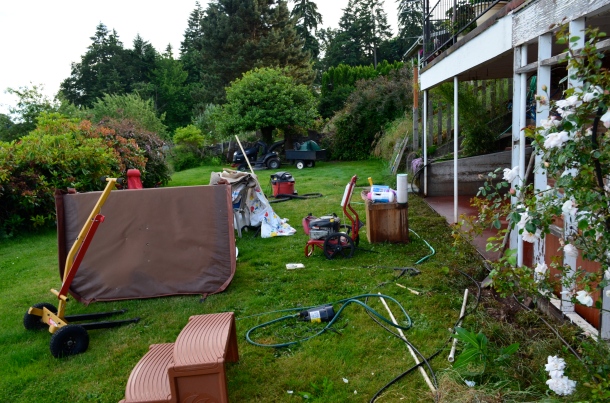 Needless to say, she wasn’t overly impressed and I have to agree, it’s not very pretty. I had to remove all of this “stuff” from the patio before I could clean it. By the time I was done I didn’t want to move it back, so that’s where it’s staying all night – maybe two nights – unless it rains. Then I’ll move it.

Once I got going with the camera, I couldn’t help but wander around the yard taking pictures of some of our flowers. Doing this, I discovered that we have some sort of patriotic flower … I’ve known it was there for a long time, but I never really looked closely at it before. Turns out it’s pretty unique in my experience … tell me what you think about this …

It’s not really a flower … it’s a bush with blooms all over it like this. This one is pale yellow, but there’s another bush with deeper color that I like, too …

I found this very interesting because I’ve never seen blooms with stars in them before.

Going down another road I have to show you the chaise lounge that I placed on top of the septic tank. Later in the summer I’ll be able to lay on this and eat blackberries from the vines that I’m training to form a cover over it for shade …

The grass was allowed to remain because it adds a country look. Anyone who visits, when the berries are ripe, will be more than welcome to partake of this lovely feature at our home. If you’d rather eat your berries from a vertical stance, there will be plenty of them around the fence line, and across the street from the house. I can’t kill them. They seem to love being ripped out of the ground then sprouting up again three times as bad just to spite me. I have to admit, though it’s a noxious weed, the berries make mighty fine pie and jam.

We missed seeing the Space Shuttle fly over this evening, so will be looking for it tomorrow. Now it’s time for bed.

One thought on “Poetry and Patriotic Blossoms”

Top 10 of Anything and Everything
Chris Martin Writes
Coco J. Ginger Says