I forgot to mention yesterday that before the rains came I was able to mow our yard (the front), the dog’s yard (the back), and two of our neighbor’s yards. Although I’m elderly myself, and might some day soon have the need for someone else to mow our yards, those for whom I performed this service are considerably elderlier than me. So, it was a good thing.

This morning was pretty normal … you know, up with the dogs 5:30-ish, read till 6:30, sleep til 9:00, then think about getting to work. The latter happened around 9:30-ish. On the slate were the windows for Diane’s bathroom. They’ve been painted (outside) and stained (inside) and were just lying around in the basement drying. Today I was going to clean the paint and stain off the respective sides of the glass, then consider putting them back in the frame. But, before I could do that Diane insisted that I had do something with the bathroom door which she claimed had all kinds of runs in the varnish. I did put a coat of polyurethane on it yesterday, but the runs were already there. She didn’t believe me, but I swear that’s true.

Bowing to her wishes, I removed the door and took it to the basement so I could sand and refinish it. Before that happened, however, Jennie called to report the tub in their kids bathroom started pouring hot water and they couldn’t turn it off. Thankfully, I had a t-bar handle for use in shutting off water at the meter. It’s also handy for turning the water back on when the water department turns it off for some reason.

After getting the water off we checked to see what was going on and discovered mold around the tile. So, since we didn’t have to worry about water, Daniel and I started ripping out the wall at the shower end of the tub. The sheet rock behind the tile was the wrong kind and was pretty wet, a perfect atmosphere for mold. It came apart pretty easily. There was mold on the bottom 2 feet and we were able to get it all. But, because we were having more fun than a normal person is allowed, we continued ripping wallboard out all the way around the tub. Actually, we did that because we the waterproof kind of sheet rock like it’s supposed to be. We figured we would install a tub surround, instead of tile, but still need the sheet rock to be correct.

During the demolition I was allowed to wield the sledge-hammer for a bit and made it necessary to replace the tub when I chipped it with a mis-hit. So, now we plan to remove the tub tomorrow, maybe. It shouldn’t be difficult because it’s not a cast iron job. I’ll let you know how that goes.

As I scribble, I’m watching the Oregon State Beavers play the Indiana Hoosiers in the College World Series in Omaha. They just finished the 4th inning and Oregon State is up 1-0. You needed to know that. Some of you may remember when Oregon State won back to back titles in 2006-2007. In 2006 they became the 1st “cold-weather climate” to win the title.

After replacing the gaskets in the tub valves we restored power to the water system to ensure it wasn’t going to leak. It did, a little, on the hot side but I was able to stop it with more effort than normally necessary for a good faucet. So, I think the faucet is compromised and may need to be replaced. That remains to be seen the next time we remove water power to the house.

Now we’re letting dry out over night with a fan blowing on the damp area. Then we’ll clean it with bleach and let it dry again. Then we’re going to rip up the linoleum, pop off the toilet, and see if there’s any damage to the floor in that area. When we’re done it will be a new bathroom. Honest.

I tried to start my truck this afternoon, but the battery was dead. Bummer. It’s charging, now so I can try it again tomorrow.

Just now Diane told me that PD, one of the neighborhood feral cats we’ve befriended, was munching away at the outdoor dining facility on our back porch, then all the sudden he was gone and there was “an enormous cat” in his place. The biggest cat she’s ever seen, she said, so naturally I had to get up to see it. It was big, for a cat, but not so big for a raccoon. Considering it was still daylight, and raccoons are nocturnal by nature, I can understand how she could mistake it for a large cat. Our view was of its backside and its tail was hidden by a bucket which compounded the confusion. So, I rapped on the window and it turned around to look and confirmed it’s species with that black mask and little pointy rat nose. Diane slugged me when I said, in my announcer voice, “and Diane mistakes a small raccoon for a large cat” knowing full well that was a prelude to a blog entry. So there you have it. I’m officially in large trouble, now.

So, I shall quit, leaving you with this rainbow that invaded our back yard in as the storm passed over. 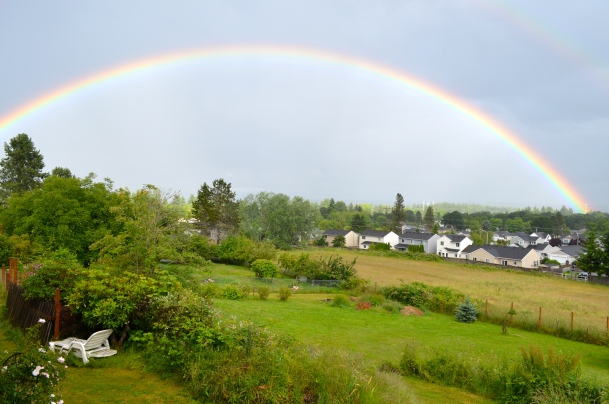 … it was actually a double rainbow.

… and I caught Breezy doing her yoga exercises on the bed … 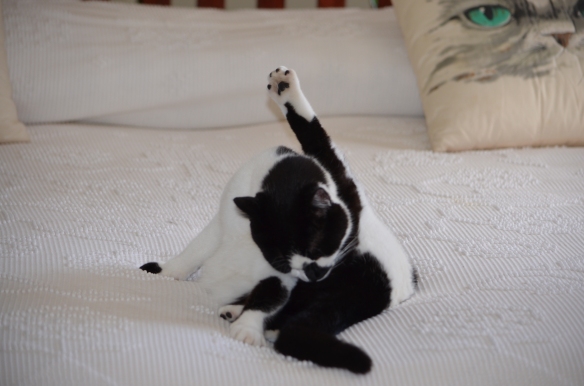