Today it didn’t rain, again. That’s, like, 3-4 days in a row that it hasn’t rained. Things are still pretty wet, though, because we are smothered in thick fog most of the time because of our proximity to the mighty Columbia River. Typical for this time of year. The fog, however, doesn’t keep the avid golfers among us off the links. No siree. They go out there with lots of faith that once they hit their balls they’ll be able to find them. I, of course, go along just for the fun of it because I’m kinduva golf sheep. You, know, the one who just follows the crowd.

So, a 10am appointment was firmed up for this morning. Before doing that, however, I had to visit the local lab to donate blood to ensure my drug levels were within tolerance for someone my age. They were also testing my BS level to see if it’s out of whack. I think it was so the doc could check my blood sugar, too, but that’s a guess.

I was only a few minutes late to tee off so all was well since none of us are ever in much of a hurry. As I was paying my $10 green fees I spied a nice pair of Nike golf shoes that were on sale. I’ve never in my life purchased a new pair of golf shoes. I’ve never ever purchased new clubs or new balls, either. All my stuff is donated or purchased at Good Will. I’m a seriously cheap golfer. Today, however, these shoes kind of called my name. Damn those shoes. I was on my way out the door when I heard them call to me. So, I picked them up and saw that they were size 10 1/2 and they appeared to be the same length as my sneakers when I put them sole to sole, so decided to try them on. I knew it was a mistake, but I couldn’t help myself because on the box it said they were waterproof. During winter golf in sneakers your feet get really wet in a very short period of time so you’re wet and cold right out of the shoot.

The shoes felt pretty good which surprised me because my sneakers are size 9 1/2 so I put them both on, paid for them and headed out the door. They felt really good and they proved their worth on the first tee when my feet didn’t slip even one bit. Better yet, while walking down the fairway through extremely wet grass my feet remained dry. I was ecstatic about that and decided that I would try really hard to shoot something less than 60, a lofty goal for me.

By the time we got to the third tee the fog was going away and there were spots of blue sky peeking through the gaps.

As we played I got more and more tired, but my feet were dry. The score was competitive amongst us three and I was optimistic about obtaining my goal. On the sixth green it was evident that Doug was getting tired, too, when he did this after his last putt …

When he tried to put the flag in his bag he noticed something was wrong.

On the 7th hole you would have thought we were all playing cart golf. That’s where everyone hits to the same area so there isn’t a lot of driving or walking involved to continue. We made almost a perfect triangle … 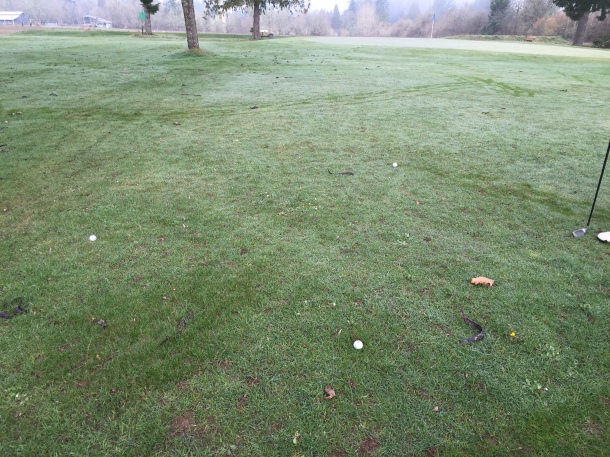 Mine is the one on the left. That’s not important. Just thought you should know which one was mine.

When all the math was done, I wound up with 59, meeting my goal to beat 60, and my feet were totally dry. It was a good day.

When I got home Diane wanted to dress up and go to Wal*Mart to get some important stuff and a Subway sandwich. The sandwich was the most important part because we were both pretty hungry. The blood I donated in the morning was a fasting version and I hadn’t eaten anything of substance for about 15 hours. I was due for sustenance.

Here’s how we got there …

We actually didn’t make it all the way to the store because Diane was cold. It was like 37 degrees outside, but it was sure pretty. She stopped and we put the top back up before finishing our business.

As I write this, Diane is off playing bunco at Grace Baptist Church, which I thought was illegal, leaving me home all alone to figure out what to eat for supper. Guess I’ll go do that now.