So, there I was, next to the garage, digging a ditch to drain the water out of the driveway, when Diane came out to make sure I was really working, and she looked up and said, “There she is!” Following her line of sight I saw the Betty Cat in our neighbor’s garage window. She’s been gone a week, but I’m sure she hasn’t been trapped in their garage for that long because they go somewhere every day. So, I suspect we were just being shunned for a while. Anyway, Diane’s happy because the last time she saw the Betty Cat was just before it got all stormy and she wanted in pretty badly. But, we made her stay outside. So, we both thought, perhaps, a coyote snacked her up. That’s a pretty common thing around here. Cats go missing all the time. But, she came back for a visit.

After making sure I was still working, Diane took Ziva to the vet to see what’s going on with the area around her tail. Ziva’s tail, not Diane’s. Ziva worries it all the time and has managed to remove some of the hair and make little scabby patches on her skin. Doc said she had allergic dermatitis. Probably from a flea. She said it only takes one flea bite on some animals. Ziva doesn’t have fleas so it must have been a visiting flea from some other country. They are not allowed in our house, so she must have encountered it in the back yard as the flea was passing through. Who knows? Certainly not me.

Diane went to visit her Mom, Jean, a while ago and has since returned. When she got back she decided we needed a pizza for dinner so she went back to Papa Murphey’s to get one. We really like Papa Murphey’s. She’s since returned from that trip, too. As a matter of fact, the pizza just finished cooking while we were on the porch watching a spectacular thunder storm. Lightening abounds. I tried getting a picture but my camera isn’t fast enough to do that. So, I’ll just share a picture I found on Bing… 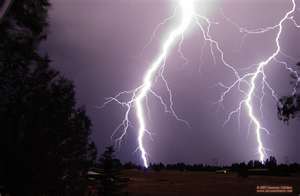 That’s actually the picture of a lightening strike in Oregon that I could have easily took had my camera been of a better quality. But it isn’t, so I couldn’t. But, what we watched was pretty much like this. The storm didn’t last very long but it was pretty dramatic. It provided Diane a chance to ensure the ditch she made me dig worked adequately. I was pleased that it did, otherwise I would have had to go outside in the cold rain to fix it.

While Diane and Ziva were at the vet, I left the door open so the Betty Cat could enter if she wished. She did and it made Ozzie run around in circles like a … well, like a little poodle on speed. He does that a lot. Spin in circles. We think he does it when he’s happy, or excited, or needs to go outside. We’re not quite sure which it is, but he, and the big dogs, know what “Outside” means. At that word they all head for the door and Ozzie starts spinning in circles, barking with his annoying little voice.

The cat went in and out, like all cats do, and we decided she’s an outdoor cat because that’s where she appears to be most comfortable. She did come in for a while, however, and sat in my lap long enough to make Ziva a little jealous. So, Ziva jabbed her nose at the cat, daring her to do something about it, and she did. She whacked Ziva on the nose about six times in a matter of milliseconds. She’s fast. The problem was, being in my lap and all, created a situation where the cat had to secure herself in case she had to attack. meaning that her other three feet had to dig in, if you know what I mean. The end result of all that excitement was about a 3 inch gash on my right foot, which I happened to have in the chair with me. It bled severely. Sadly, the camera was too far away for me to get it before Diane covered it with bandages. It took three large ones. And it hurt, a lot.

Now it’s late and time for bed so I must quit. But, I’m in the process of printing out our church’s newsletter, which I’m forced to create each month, and can’t stop until it’s done. I would have done it earlier, but Diane made me eat pizza and watch TV with her instead. So, I’m running a little late. Actually, she didn’t make me watch TV with her. I made that up.

Tomorrow I’ll take a picture of my cat wound after the bandaids fall off in the shower. I’m sure you’ll be impressed to learn, after you see it, that I did not cry. Not once. But, I did reintroduce the cat to the porch. We were both happy about that.