Some of you may have already done the math and discovered that Eureka and Grants Pass are only 164 miles apart so why such a short trip this day? Well, almost the entire trip is composed of twisty, turny roads and lots of maintenance folks holding signs with “Stop” on one side, “Slow” on the other. We’ve all seen those. Without fail, we always wound up with the guy who had the “Stop” aimed at us. Not a bad idea, I suppose, since the road kind of caved into either a canyon or Pacific Ocean over some long stretches. Pretty exciting stuff if you’d been there when it happened, I’m sure, but totally mind-numbing delays currently. However, I have to admit that the delays were in probably the most beautiful country in the world.

If you’ve never had an opportunity to visit these majestic trees, you are missing out on a humbling experience.

Before leaving Eureka we had breakfast at Denny’s and had the pleasure of seeing our waitress, Lisa, one more time. Both the food and the service was exceptional.

Then we stopped at the beach so the girls could spend a little more time playing. Diane and I sat in the truck and read our respective books. it was all good. When the girls finished with whatever they were doing on the rocks they made their way back to us and we continued our trip North. Since we knew it was going to be a short journey we chose to stop when the mood struck … like when we saw another one of those immense trees lurking alongside the road. Had that been the only criteria for stopping, we’d never made it to the next mile posts. There are turnouts all along the highway to allow folks to exit their vehicles to enjoy the splendor.

At one of those spots there was a small stream where pretty rocks overcame the joy of extremely large trees for the girls. They found a small stream and spent their time searching through the water for rocks while I wandered amongst the trees. All of us enjoyed ourselves.

At Klamath, California we stopped to visit the Trees of Mystery. That’s the pace where Paul Bunyan and his faithful blue ox, Babe, stand guard alongside Highway 101. After a quick trip through the gift shop we got in line for a walk through the trees, something that would never get old for me, then a 7-minute trip on the Sky Trail gondola to the top of a tall hill with a stunning view of the forest.

We met some nice folks going up, and some more on the trip down. The girls opted for the mile walk down a very steep path. It didn’t take them very long and neither of them had new injuries so they apparently didn’t fall down. Ceiarra’s white sneakers took a hit and got a little dirty so it was kind of a minor disaster from an apparel perspective. But, bottom line, they were both smiling profusely upon their return.

This is a ‘selfie’ by a pro. I was trying to figure it out then Lydia took my phone away from me. Good shot.

Then we left, said goodbye to Paul, and headed north. 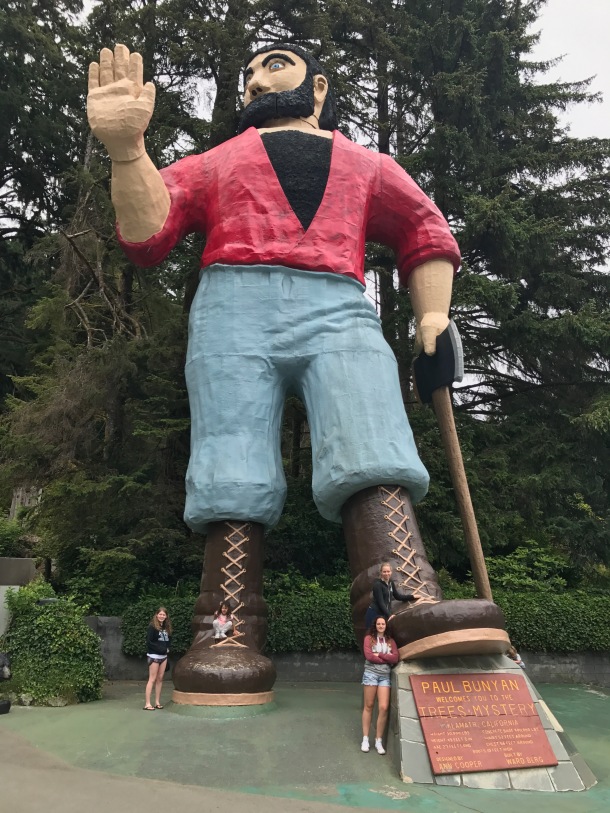 Eventually we made it to Crescent City, our original destination for the night, arriving just in time for lunch. We drove all the way through town looking for something likely. Finally, I was told to turn around and return to the first place Diane saw and it turned out to be a great place. Good food. I ordered fish and chips, Diane had a tuna melt, Ceiarra had a taco salad, and Lydia had chicken strips and fries. She was thinking about fish and chips then negotiated with me to trade one piece of fish for one of her chicken strips. I did it and finally realized why Lydia likes those chicken strips so much. However, one thing I would suggest to others who order fish then trade for some chicken, that you should also bargain for some of the ranch dressing that comes with the chicken because it doesn’t go well with tartar sauce. Apparently, though, according to Lydia, ranch goes with everything, even fish. Who knew?

After lunch we went a little way south to the beach for one more beach ‘fix’ before heading inland to Grants Pass.

Ceiarra was content to sit in the warm sand and just relax.

Then it turned into an art project. Pretty crafty, C. 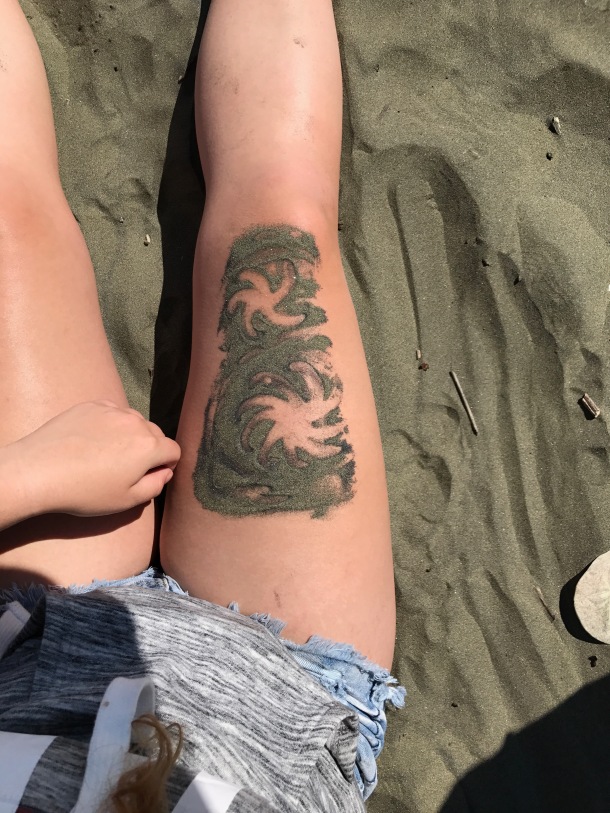 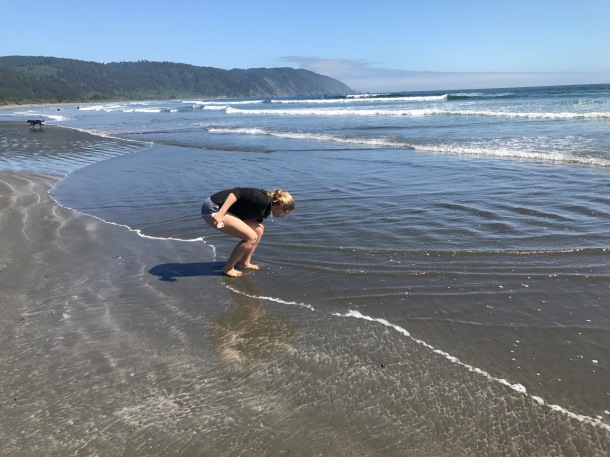 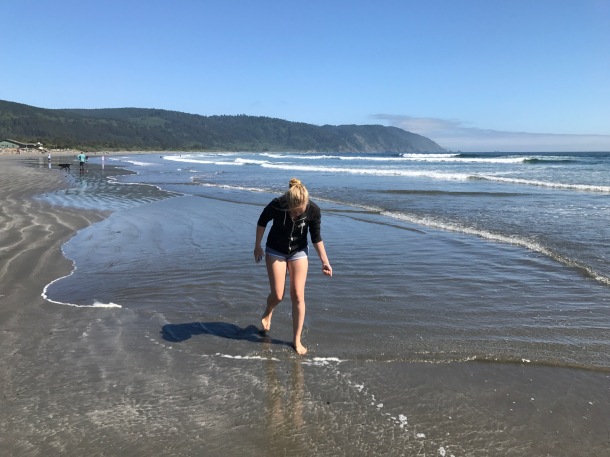 Diane was content to just sit and take in the sun.

It was another curvy journey on Highway 199 to Grants Pass. Really narrow in spots, too. We stopped in Cave Junction, once we made it to Oregon, and got dessert at DQ. I offered Ceiarra a turn at the wheel but she said, “No way! I’ve got a Blizzard to eat!” So, I took my chocolate malt back to the driver’s seat and continued the journey. I haven’t driven this much on a trip since I was, like, 22. That was before I was married and had the option to drive when I wanted to. Once married I still drove quite a lot, but having a partner in life meant I had another driver, too. And she loves to drive. As we’ve aged Diane has taken over the lion’s share of driving and has become a far better driver than a passenger. It’s OK with me. Gives me a chance to sleep. With her broken arm, however, driving on crooked roads isn’t an option. So, it’s me. And I’m doing a good job, thank you very much. Lydia was so comfortable when I drove that she slept most of the time. Or, may she slept because she was afraid.

After a restful night in Grants Pass, we headed north on I-5. Since it was freeway all the way, Diane chose to start us out and drove to lunch. I don’t remember where we ate. I don’t even remember if we ate. We got home on Wednesday, day before yesterday, day 15, about 3 pm.  Lydia’s baby, Kylo, was over joyed that she was home. Knocked her right off her feet. He’s not a light-weight 3-month old puppy.

Our dogs were happy to see us, for about five minutes, then they took a nap. That’s OK. We were home.

I’ll finish with a nice poem and photos of some really awesome trees. 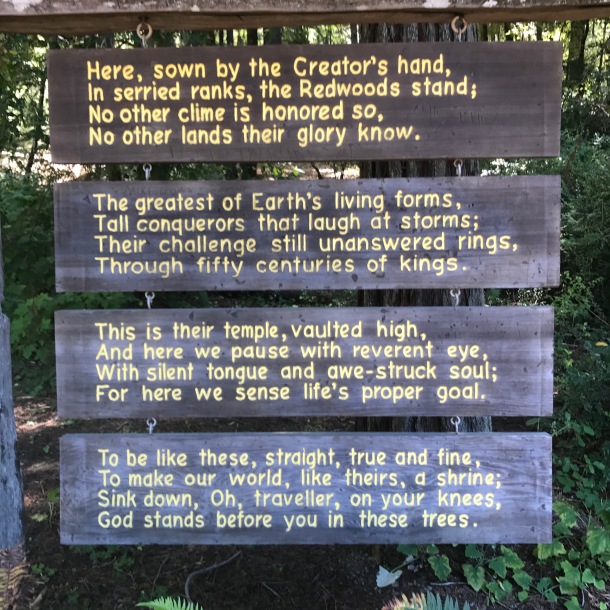 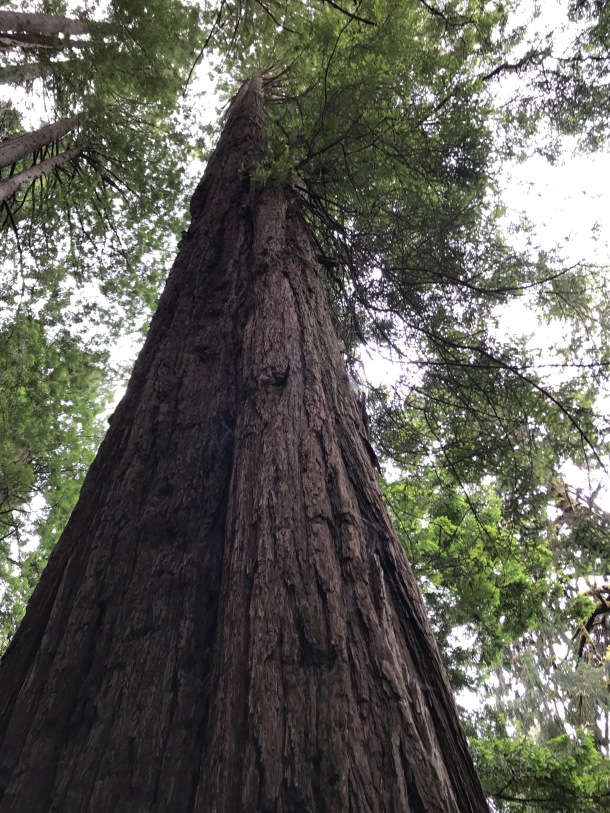 Pretending to conduct a wedding. 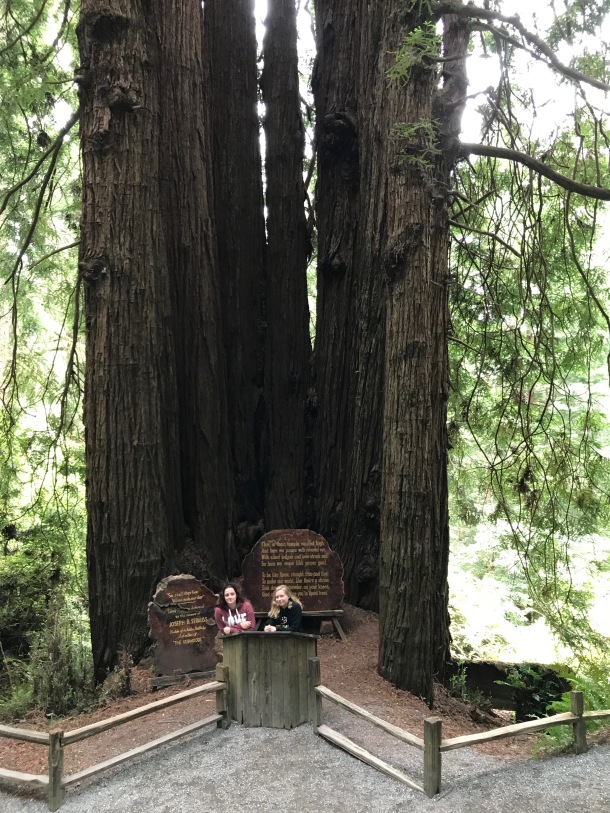