Simple plan, right? Well, it morphed quickly into the Adventure when Diane returned home from her dermatologist in the morning with lots of burned, crispy spots on her neck and doctor’s orders to remain out of the sun for 4 days. Considering the way the sun shines around here, that could take a couple of weeks. When I returned from golfing, which I did while Diane was at the dermatologist, she said she wouldn’t be going to the games which changed the entire plan for driving Cedric back to his ship.

The new plan was for me to drive Jennie and Cedric to the game, then just head north after the games. Simple, right? Well, to get ready, I had about an hour to mow the front yard, shower, and pick up Lydia and Cedric for the 1.25 hour trip to Sandy. Traffic was horrendous and it took 2 hours so we missed the first inning. It was OK because Lydia wasn’t pitching. Brooklyn was! Shock. She was supposed to have been off doing her Columbia County Rodeo Queen responsibilities. So, the six seniors got to play two more games together. Lydia pitched the first 3 innings of the second game then moved to first base. 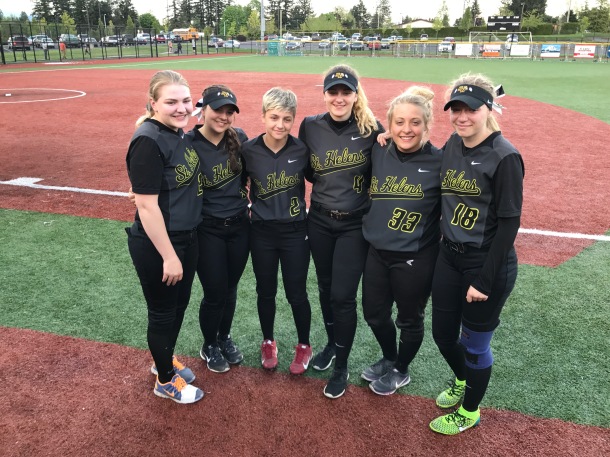 Towards the end of the game Cedric gave us a huge sigh, hung his head, and reported that he had forgotten his keys at home. That required another change to the plans. Instead of going directly north via the freeways, we had to detour back through St. Helens. This increased the 3 hour trip to 4 hours. He had also forgotten one of his hats. OK, it happens, so we just dealt with it and went on about the business of watching the rest of the game.

Before leaving, Cedric had time to say good-bye to Lydia who was going home on the bus with the team. She got very emotional knowing she wouldn’t see him until next February, at the earliest. She cried, something she rarely does. For that reason, and others related to female hormones, some of her team mates started crying too. It wasn’t long before many of them were crying in support of Lydia’s sadness, and Cedric was getting hugs from many of the girls who don’t even know him, wishing him luck. It was a Kodak moment the coaches couldn’t ignore so they gathered the team for a picture of them crying and laughing. Cedric was very touched by it all, as were we.

Then something happened off to my left that caused a reaction that soothed the crowd.

With all this emotion going on Coach Little told Jennie to just take Lydia home with us, which we did. She slept with her head in Cedric’s lap most of the way. During the trip it Lydia said she’d like to go to Bremerton with us because she’d never been on a navy base and would like to see Cedric’s ship. School on Friday was the only issue but Jennie resolved that quickly and the deal was done. Lydia was going with us.

We got to St. Helens around 2030, Lydia got a go bag while Cedric passed out more hugs with his brothers, Jeran … 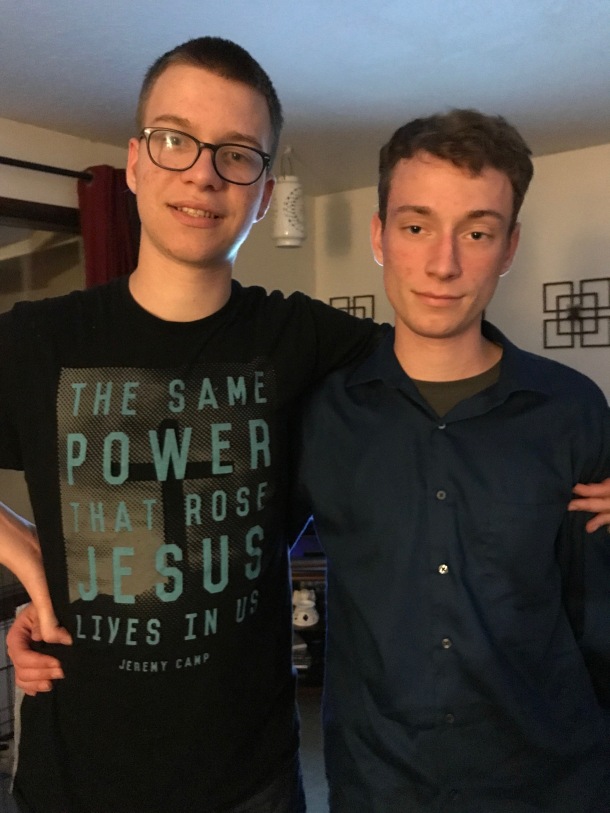 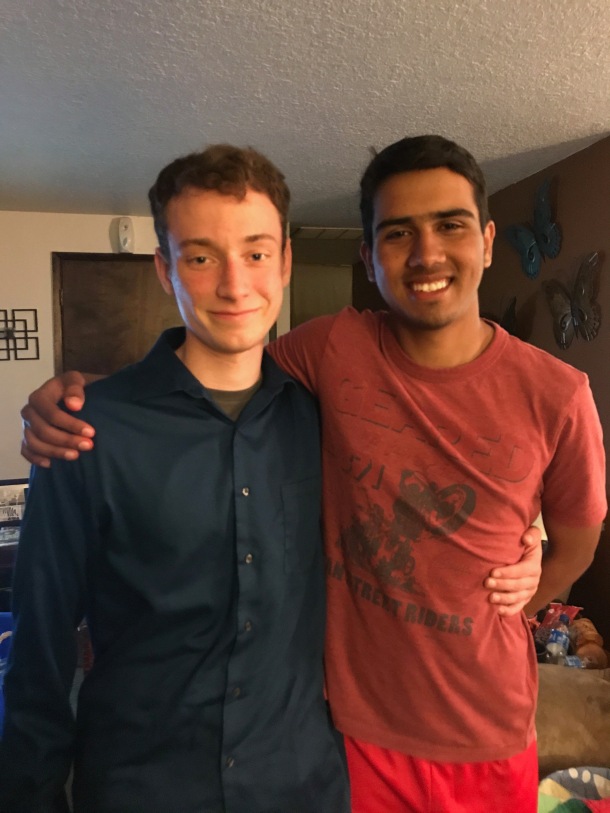 … and away we went. It was dark, nothing to see, and Jennie drove from home to Bremerton. We got on base no problem, and dropped Cedric at his ship’s liberty gate. Lots of lights but not a photo-op.

Then we went in search of the Navy Gateway Inn and Suites (NGIS). It took an hour to find it and required the help of a person on the phone guiding us while she used a map of the base. While looking for parking I noticed signs indicating the spots we’re reserved for NGIS which looked suspiciously like NCIS so I didn’t park in them. Finally, I looked closer and noticed it was for the hotel and gratefully parked.

When checking in I bantered with the desk clerk, Randy, and learned he was born on Guam. Jennie piped up, “I was too. In Agana!” she said. What a small world even though Jennie was born there about 20 years before Randy.

Room had one bed and a recliner. Lydia, to be kind, said she wanted the recliner but I declined her the recliner and reclined in it quite comfortably the entire nite while the two girls, one of whom forget her Jammies, rested nicely on the queen bed. Even though Lydia slept in the clothes she wore for the trip, she intentionally didn’t bring Jammies, so I guess it was Jennie’s Jammies that didn’t make the trip. It was OK. By the time we got the lights out, it was about 0100 and we were all dog-tired. 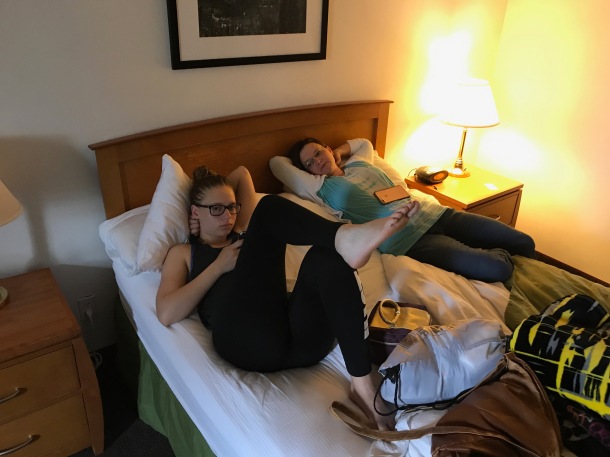 Got up about 1000, left the room, then went to the NEX for some trinkets to commemorate the journey. Then I drove them all over the base to get a good view of the USS Nimitz in the daylight so the girls could see it. Last night it was too dark to see it clearly.

Then we went to breakfast at Denny’s which was almost all the way north in Silverdale. We all ate quite well. Lydia had a bacon burger with avocado which I had doubts that she could wrap her mouth around …

Jennie had this, but didn’t want the sausage links … 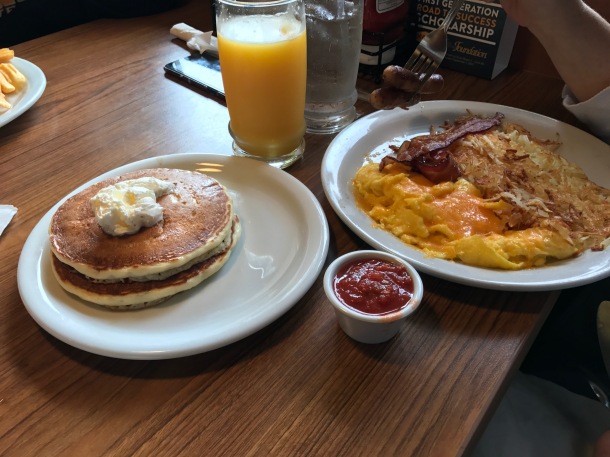 … so I got them with my Denver omelette …

After breakfast, Jennie drove us south toward home, the long way through Shelton, because we didn’t want the freeway stress. About 50 miles from the finish, she cried Uncle and I took over to the end. She drove the lion’s share of the trip and didn’t scare me even once. I was proud of her. After I started driving it began raining harder, and harder causing me to run the wipers at full speed much of the time.

I got them home a little after 1500, waited for Lydia to get her softball gear, then took her back to school for practice. The team has one more game on Friday then they can put their softball gear away. Lydia will pitch the entire game Friday because Brooklyn is definitely done for the season.

I arrived home to an empty house because Diane is at the court house again, working with the election committee. Well, the house wasn’t really empty because the dogs were here, and they were very happy to see me. They’re always happy to see anyone, even if they’ve only been gone a couple of minutes.

Oh, and the hat Cedric forgot at home? He forgot it in the truck when he got his stuff to go to the ship. Lydia found it. 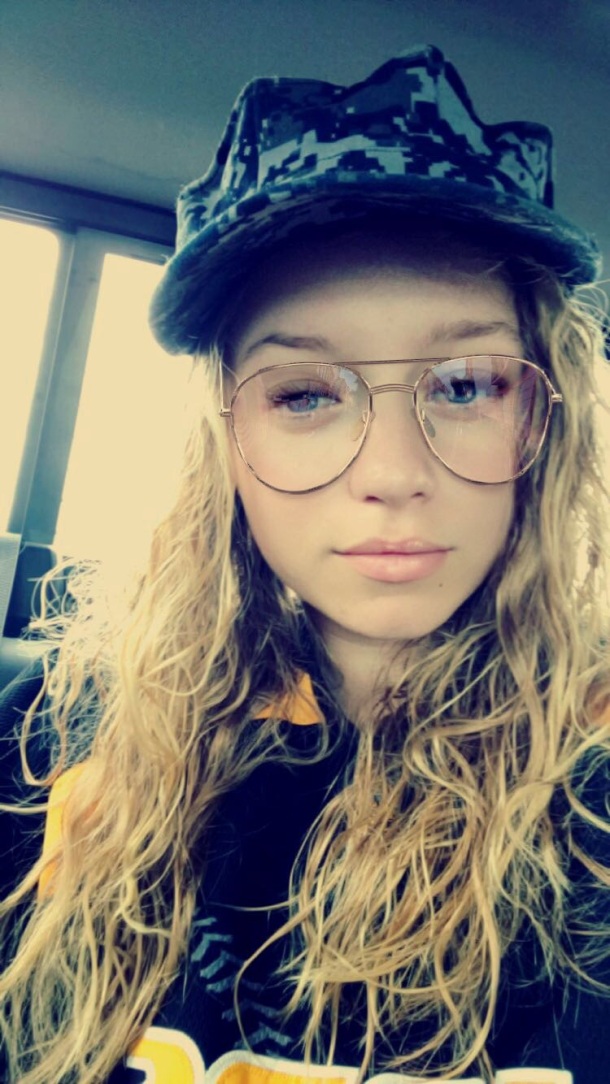 I was feeling pretty good until I put this all down on paper and now I’m tired again. If it was a little later, I’d go to bed but it’s only 1730, so I’m going just have a nap.

Oops! Diane just buzzed into the garage in the roadster so maybe a nap isn’t an option. I may have to go out and kill something for her to eat.