I suspect that many people will wind up here because of the generic title of this post, not because they know me and are interested in seeing what will be revealed this day from my half-wit age-adled memory banks. So, let’s get to it …

Father’s Day began yesterday with a trip to the beach with Diane, my lovely bride of umpteen-eleven years. Jennifer, Diane’s oldest Daughter, and Jeran, her youngest Son, filled the remaining seats in the Impala as we ventured forth at the un-godly hour of 0800 on our trip to Cannon Beach to join the crowds near Haystack Rock for the 50th Annual Sand Castle competition. It’s something we’ve never done before and we deemed it was time. Besides, it’s been a while since we’ve been to the beach and it’s one of our favorite destinations. Another reason for the trip was to watch a soccer match between Lydia’s tournament team play against the Astoria Varsity team.

First, the trip … it is my custom to relinquish my front seat navigator’s position to company whenever we have any because that’s just the way I am. Another reason I do that is so the new passenger can sit closer to the conversation she is undoubtedly going to have with the driver. It’s a safety thing, ensuring the driver isn’t engaged in a heated discussion with someone in the back seat.

Jeran joined me in the back seat and we were very comfortable during the entire trip. Everyone was being so good that Diane stopped at the Berry Patch Restaurant in Westport, one of our favorites, where we ate a hearty breakfast. Once our tummies were loaded, we continued our trek to Cannon Beach.

As the first Cannon Beach exit from Highway 101 loomed in the distance, Diane and I had a brief discussion about whether or not we should continue south to the Tolovana exit. Before we ended the conversation Diane had made the decision to take the first exit that also leads to Ecola State Park. Instead of turning right at the first stop sign after exiting all those frantic drivers on Highway 101, which leads to ECP, Diane went straight ahead into town. It was a good choice. She made another one of those when she didn’t cruise down the main street of town looking for a place to park. Instead, she took a parallel street, went south a few blocks, and pulled right into a vacant space.

Across the street was a pretty incredible art gallery that we couldn’t pass up because it had a bronze statue of a little girl holding a cabbage patch kid and it reminded Jennifer of her youth when she got a new cabbage path doll every time I went to sea when she was small. The statue even looked like her. Sadly, I didn’t take a photo of that or of anything inside the gallery. Amazing stuff.

The beach was only a few blocks from where we parked and looked a lot like this when we got there … that’s Jennifer in the middle of the photo taking the long way around to all the people gathered closely around the roped off areas where sand castles were being created.

Diane, Jeran, and I took the short cut to begin, but Jeran bailed on us and headed over to his Mom who was walking on firmer sand. They beat us to the displays for some reason. It didn’t make sense. 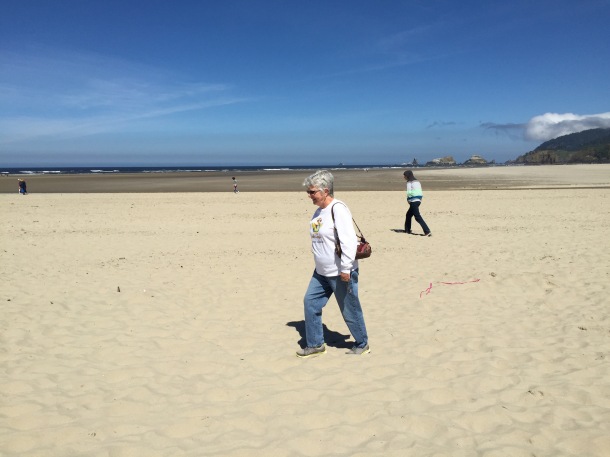 This is the first area of about 10 that were roped off so artists could work without interference from the masses of people watching their progress. We arrived shortly before 1130 when the judging was supposed to commence, but none of them were anywhere near finished. Sadly, we couldn’t wait to see the finished products because we needed to get to the soccer fields on Ridge Road which defines most of the eastern boundary of Fort Stevens State Park.

On the way back to the car we stopped for a short rest and photo-op where Diane took this photo to commemorate the day. Had I been more aware I would have sat straiter which would have allowed my stomach to retract a bit into the cavity from which it was seeking escape as she snapped the shutter. But, it is what it is.

Lydia’s soccer team played extremely well beating Astoria 8-1. Lydia played the first half and a newly acquired 2nd goalie played the second half during which Astoria’s only goal was scored. This pleased Lydia.

I must interject to report that next year, Lydia’s Junior year, she has been designated as the varsity goalie for the school team. She’s really stoked about that and is looking forward to the experience. So are we.

On the way to our perch on the hill surrounding the field on which the girls played we encountered what most people would call a “mole hill” in most parts of the world. Here at the beach, however, I figure this one should be called a “mole dune”. It’s all sand so what else could it be?

Before leaving Warranton, we stopped at Duggar’s restaurant for a late lunch. We weren’t sure Lydia was going to make it there because she only had one sandwich to fill the void for that 2 mile drive. It was a really good lunch and the trip home was restful for all of us, even the driver, Diane. She got to go 100 mph more than once.

I don’t think I mentioned that I assisted Daniel with his task of replacing the disc pads on his commuter car on Friday. Apparently it was a dirtier effort than I had anticipated. I even wore gloves! 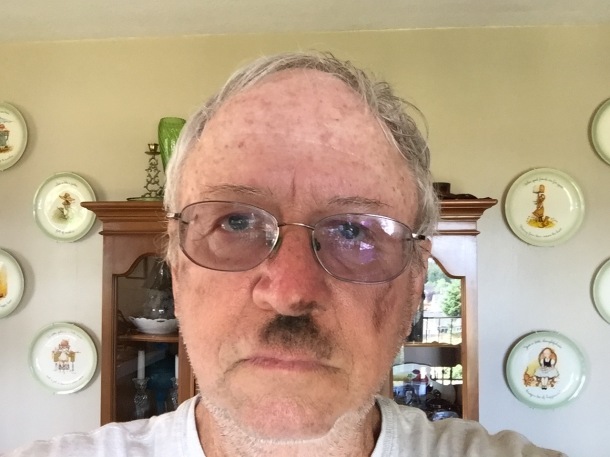 This morning Diane was up and rolling at 0700 making a cassarole thing for the Father’s Day brunch the ladies were putting on after church. I even got to help and was glad to do it. Helping my bride with any task is my destiny. I’ve learned, however, that it’s prudent to wait until asked instead of barging in a taking over as I’ve been known to do historically. Lots less stressful on everyone concerned.

Now the light is fading from the sky on this longest day of the year, and I hear Diane dialing up an on-demand movie from our stunning array of entertainment available due to a free weekend of on-demand HBO & CINEMAX.

It’s been a great weekend and I must now bid you farewell till another day.

OH! And Happy Father’s Day to all you Dad’s out there.