This morning, when checking my email, I was once again amazed to discover that someone took the time to read what scribble. That happens every day, actually, but this morning’s offering caused me to consider putting more thought into what I share. I can only believe that adding the word “Karma” into the title prompted a look by Gede Prama. Whatever the reason, it added another layer of blessings onto my  already overflowing life. Check him out and let me know if you think I’m nuts.

No, scratch that … just let me know if you find his messages helpful.

I endure it every day in some manner, as I suspect pretty much every one does. Sometimes it’s so faint I barely notice it. Then there are times when it becomes the only thing I can think about, willing it to end, willing myself to get beyond it and move along. We’ve all had those, I know. Like, when you stub your bare toe, really hard, into an immovable object. That hurts like crazy, doesn’t it? I’ve done that. I’ve also hit the end of my big toe with a hammer, so hard I actually thought I was going to die from the pain. This is a story I’ve told before, buried in an ancient post, so will not repeat it.

A lot of the pain I experience, however, isn’t self-inflicted because of stupid things I do,  but rather as a result of Karma, I believe. I’m being punished for some deed that I failed to recognize as one that was not aligned with universal acceptance. Sometimes the sin isn’t readily apparent, taking days, perhaps, to resolve into a meaningful understanding of what I did wrong. Consequently, I’m fated to repeat the errors until the consequences of my actions are hammered home, so to speak, until I’m forced to consider my moves carefully.

That’s tough for me to do because I’m a pretty spontaneous person. That trait is directly attributable to many of the injuries I’ve sustained over the years. I just didn’t think ahead far enough to figure out the possibilities of my actions.

I drop and spill stuff all the time, but not all of those events cause me to change directions like that socket did. Like, a cup of coffee, for instance. Granted, it makes me   immediately change direction to seek something with which to clean it up, but it doesn’t deter me from my primary object which was probably getting to the bathroom. before something more exciting took precedence. Sometimes the spilled coffee is ignored for a moment, or two, before getting adequate attention.

During this downhill side of life the spontaneity is less physical and more spoken or written. The physical side has shown me that, since moving from vertical to horizontal is becoming increasingly more difficult because of complaining joints, it’s not a good thing when I drop “stuff.” Like that socket I spoke of yesterday. I’m confident I’ll find it, eventually, but dropping it caused me to move on to something different. This half of the journey has proven to be a bit less painful, also. Partly because I’m slower, and actually think about what I’m going to do, most of the time. And, partly because many of the pain receptors in the parts I’ve injured the most, over the years, no longer transmit. They are simply worn out. Oh, they let me know I’ve done something wrong, but not to the point of hopping up and down until the pain subsides. It’s more of a warning that I should look, for instance, at the elbow side of my right arm after slamming it into the bracket that holds the hood up on my pickup. I did that yesterday, too. It was a warning shot, I’m sure, just before dropping the socket, but I didn’t recognize it as a message at the time. It hurt, I looked, and didn’t see any blood seeping into my long-sleeved short, so went about business.

Then, dropped the socket. A more stern warning from my limbic system that things aren’t going well.

Then, last night, after a pretty successful period of time playing with power saws in the basement, I received another shot across my bow, the reason for which I have not yet discovered.

We were eating dinner. Jeran was there. Diane had cooked up some really great pieces of deceased chicken, mashed potatoes, and asparagus. We all sat down at the table and things were progressing well until I was compelled to rise out of my chair to visit the kitchen for some reason which I can’t remember.

Attaining a vertical position from a seated position, especially while sitting on a chair, is not a complex move because you have both arms and legs to use to make it work mechanically in a symmetrical manner. I, however, was forced to make the move with only one leg, because the pain receptors in my right foot went on full alert.

After a rapid intake of air, the body’s response that enables one to vocally alert any one in the vicinity about the severity of the situation, I reached down to investigate the cause. 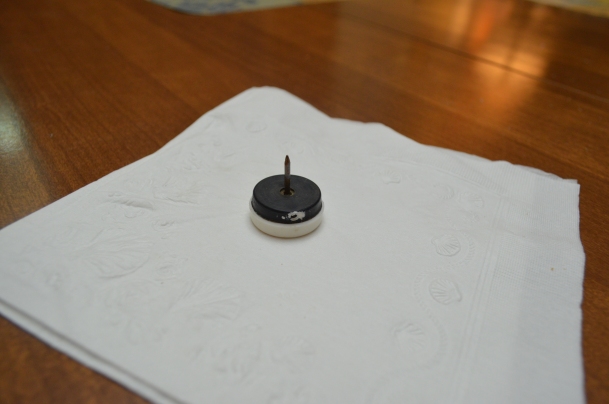 I had to yank it out. Kinda reminded me of the time Mike Friday jumped off my bed (we were kids, and he’s a cousin) and wound up with an embroidery needle stuck all the way through one of his toes.

Kinda makes you want to hop around on one foot, doesn’t it?

The immediate message I received, and the one that is probably the one intended, is that I actually should wear something on my feet, even in the safety of my own home. There could be, however, a more meaningful meaning that I’ve yet to realize. I’ll let you know if I ever figure it out.

Yesterday, for lunch, Diane made us a “Fat Tuesday” meal of pancakes. She made enough of them that we were able to do it again today.

Since I don’t have a photo of that meal, I’ll share this one of the supper I had night before yesterday … 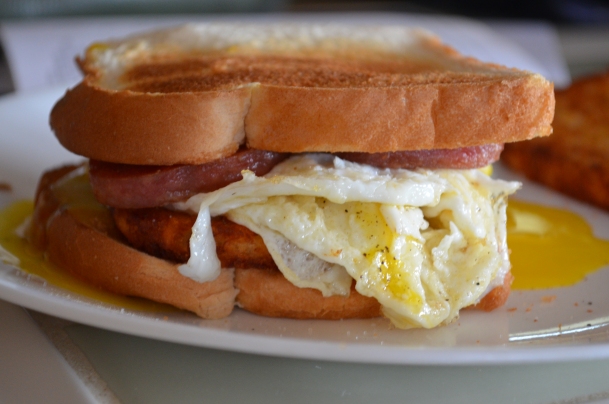 Jewel will appreciate this one because it’s your standard fried egg, potato patty, and spam sandwich. It was awesome. A Hawaiian favorite, at least from the spam perspective.