Saturday is winding down and we’re both tired because we just finished a 7 hour drive around the island. Our goal was to see the erupting in the Halemaumau crater southwest of Hilo. I don’t know when it started spouting, but it definitely is and we just had to see it. So, off we went about 1015.

Before we got very far, Diane made it very clear that we weren’t got to go very far without getting gas, first. Thankfully, Waimea was on the route so it wasn’t going to be a problem. Convincing Diane it wasn’t going to be a problem was a problem. As we got closer and closer to Waimea, and the gas gauge hadn’t touched the big ‘E’, her tension eased. We found the station, agreed to pay their $4.21 9/10 a gallon, and I filled the tank while Diane went inside to get us a couple of bottles of water. I only put 10 gallons in it because I needed to make sure the pump was working correctly. I stopped it at 10.01 gallons and it cost $42.19 so I’m guessing it was OK. On the gas we’ve used during the past week we averaged 32.8 MPG. This is really good. The car is a Chrysler 200 and it has the same size engine as the one in Diane’s Buick which gets 18 on a good day, and there are many of those. But, it’s really comfortable. Considering the 200’s performance we are seriously considering getting a more reasonably hungry vehicle. 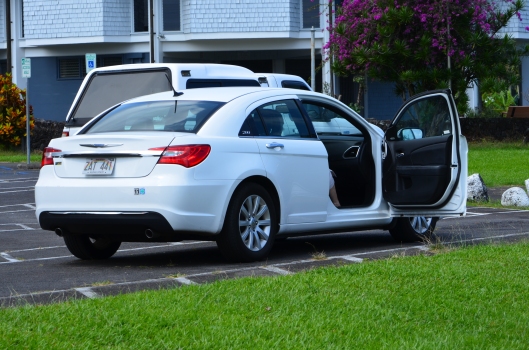 After getting the gas, we buzzed down Highway 19, for a few blocks, then decided we were hungry so stopped at a handy Burger King. Diane got her normal Whopper Jr., and I opted for something more reasonable in the form of a chicken sandwich. I was proud of myself for making that decision. Diane got the Jr because she knows they don’t cause problems for her. I did, however, drink a coke, something I don’t normally do any more.

Highway 19 is called the Mamalahoa Highway, a very melodic name for a road that travels past towns named Honokaa, Paauilo, Ookala, Laupahoehoe, all the way down the eastern coast to Hilo. The speed limit for most of the trip is 45 with many drops to 35 and some brief jumps to 55. Because of this we knew the trip was going to take about 3 hours so didn’t plan any stops along the way to the volcano. We also knew it was going to take 3 hours because Google Maps told us so.

We did make a brief stop in Hilo to check out Wailoa River State Park. It’s a beautiful place surrounded by incredible trees. There are foot bridges that cross the river, and two that span from either side to a small island in the middle. Very picturesque. 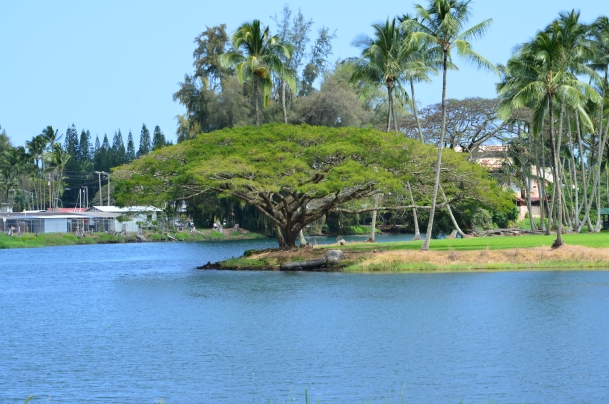 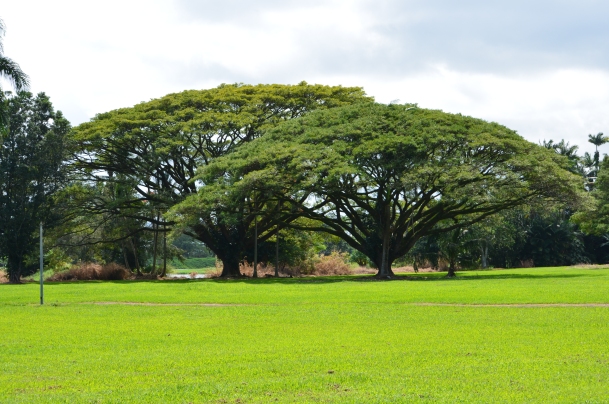 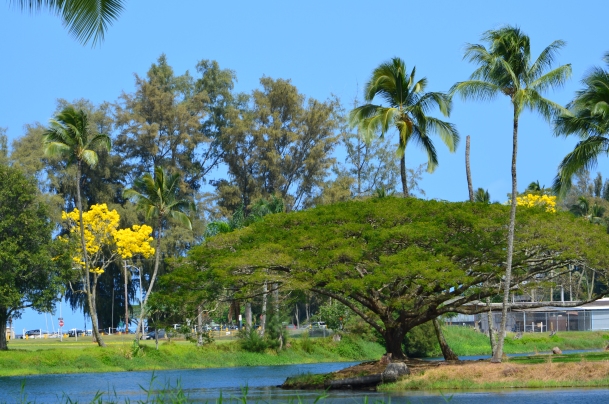 There were lots of fishermen on the far bank, and when we arrived one of them was leaving. He was holding a five gallon bucket, two long rods, a bag with food (no doubt), and he was pushing a small child in a stroller. A dedicated fisherman, obviously. This guy just parked himself by the water, tied a line to his bottle of juice, and dropped it in the water. He had a pole, but I he didn’t deploy it while we were there. 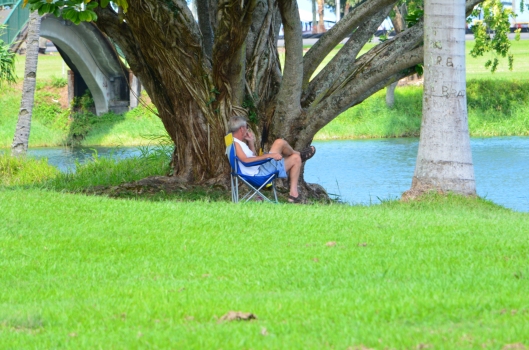 From Hilo it’s a fair trek to Volcano, the small town on the northeast side of the caldera. Volcano sounds like a really fun place to live, doesn’t it? Well, let me tell you about how you would have to get used to the smell of sulfur mighty quick if you were to live there. We know, however, that you can actually get used to odors like that because we used to have a very active paper mill in St. Helens that covered the city with its distinctive aroma.

Sulfur is something else, however. Plus, the air is thick with volcanic fog, called vog, that’s being spewed in great quantities from the eruption. Sadly, for us, we didn’t get to see lava erupting, but we got to see lots and lots of smoke … 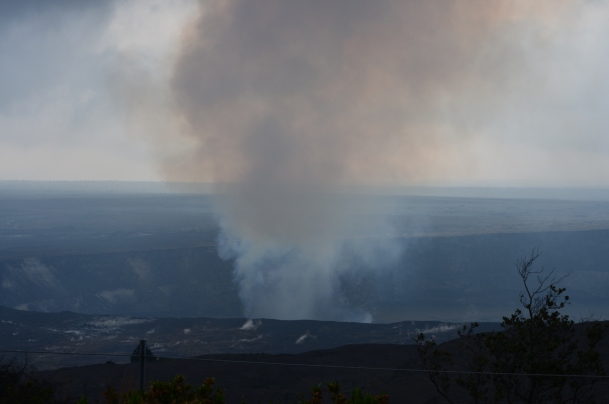 Still, even though visibility was pretty crappy, it was awesome. In addition to the gasses from the eruption, the crater floor is riddled with areas where gasses are escaping into the atmosphere. That’s true for areas all along the road, and up into the trees. It’s pretty amazing. Kinda makes you wonder if the entire place is going to blow.

Although we didn’t get to see the lava flying into the air, we were told the show really gets underway when the sun goes down. That’s when the caldera makes the entire area glow red. When we took the 7-day cruise around the islands in a couple of years ago the ship stopped in Hilo for a day. After getting underway the same evening, it sailed around the island toward the Kona side and we could see the glow from the ship. So, we didn’t feel the need to stick around for another 4 hours waiting for it to get dark. Besides, the sulfur was making my throat swell up. It was time to go. So, we did. Here’s a closer look at what’s going on thanks to the webcam installed at the overlook. Lava from the constant flow of lava has added 600 acres to the island and adds a little more each day.

Going up the Kona side of Hawaii is like going to another world because the lush green foliage gives way to vast fields of lava that spewed from one of those mountains a long time ago. It’s very interesting because you can follow the flows up the gentle slope of the mountains and see exactly how the flows split and rejoined, following the least path of resistance on its way to the ocean. The road on the north side of Kailua Kona cuts straight through the lava which lines both sides of the highway. It’s pretty amazing. I may have already said that once or twice, but it’s true every time.

We arrived back at the resort at 1730, completing the circle, and called it a day. Hope you all had a good one, too.