Saturday afternoon, once I got over my coffee induced nap, it was determined that I should do something around the house for a change. Specifically, attempt to resurrect our empty hot tub and make it work. before draining it a few weeks ago, it was flashing a variety of error codes at me that I had to research on the internet. One of them indicated it thought there was no water in the heater, and another one thought it was overheating. Conflicting and confusing, so I just unplugged it and drained all the water. Then, yesterday, Diane indicated that it would be good if we could use it once in a while which was code for ‘get off your butt and FIX it!’

So, I grabbed a bunch of wrenches, some screw drivers, and went down to see what I could see. Not being familiar with hot tub innards, I was in for an educational experience.

First, I removed the outer plastic pealing, revealing all the fun stuff inside, most of it covered with spray foam insulation. I was concerned about spiders because I’ve found a few pretty big ones lurking around the tub which would have just made Diane’s day had she encountered them first. She doesn’t, ever, because I’m always the first one there just for that reason. Oddly, I didn’t see one spider once the sides were removed. I was happy for that because I’m not particularly fond of them, either. I just don’t scream like a little girl when I see them, like Diane does.

I studied the tubes, hoses, and heater for a while, then decided to undo the only two screws available for me to turn. It was the cover for all the electrical connections, and the heater tube. Interesting stuff. None of it made any sense to me so I just started disconnecting things from the circuit board, and plugging them back in. It’s a trick I learned with computers – sometimes plugs get tired of being plugged in all the time and just quit working, from boredom, no doubt, and unplugging them and putting them back kinda wakes it up. Then it works. Like magic.

I put it all back together and turned it on to see what would happen and soon discovered that nothing had changed. It doesn’t heat properly and the 64 degree water wasn’t quite warm enough for Diane. I discovered, however, that running the jets, over and over, heated the water up, and eventually topped out at 84 degrees before I called it a day and went to bed.

During this time I fired up weed whacker and set about using it in the back yard. Diane gave me free reign with only one stipulation – that I pick up ‘all the crap’ I cut down on Friday afternoon. Those would be offending rhododendron branches that I just cut and left laying in the front yard. Also, there were more in the back yard, as well as clippings from an un-named kind of bush that served as a test run for my battery powered hedge trimmers that I didn’t think worked. It’s been sitting un-used in the basement for two years. Who knew?

So, I cleaned that all up, and caused little pieces of grass to fly all over the place, and discovered some new species of plants growing in our ‘flower garden’ that I didn’t know we had. It was exciting to have time to do that. It was pleasing and made me very tired. I sweat a great deal so had to take another shower. With soap this time.

We didn’t sit long before deciding it was time for bed.

This morning, on the way to church, we stopped by Dan & Jennie’s house so I could turn their water heater back on. I worked a bit on Friday and turned it off because the kids had gone camping for the weekend at Big Eddy in Vernonia. Seemed like a waste of power to have it running, especially when I was turning the water off and on. The little work I did was to make sure the sink was level and secure it firmly to the wall. Still lots more to do, but it won’t happen until Monday afternoon. That’s because I get to go to the VA in Hillsboro bright and early tomorrow morning to find out how long it’s going to be before I go completely blind. I’m told it could be many years. Maybe I just need new glasses. I’ll find out because this visit is actually my annual checkup, not for the diabetic retinopathy test results. Though I’m sure that will be discussed. More on that later as I learn more.

Just in case it’s a bad diagnosis, I’ve been practicing braille. That’s not easy to do when you can’t feel anything with most of your finger tips. Most of my practice is on bathroom doors, and the ATM drive through. Regarding that, I’ve always thought it was silly to have braille at ATM drive throughs. I mean, how could a blind person possibly find that useful? I have this vision of a blind person driving up to the ATM with, perhaps, their cane sticking out of the driver’s window, or just sticking their arm out waiting for it to hit something. Then, when that happens, they feel around until they find the braille instructions, pull out their ATM card, stick it out the window, and drop it on the ground, like I do. Then, since they are alone, they have to get out of their car and search for the card. When they find it, they don’t get back in the car, they just face the machine and reorient themselves, finding all the various openings, and swipe their card. Since the ATM doesn’t talk, they have to swipe their card both ways to ensure the magnetic strip is facing the correct direction. Again, since the ATM doesn’t talk, they have to guess at what’s on the screen, unless they signed up for, and took, the ACLU sponsored program that explains everything a blind person should know about every possible version of ATMs world wide.

Eventually, they get their money, but they have to go on faith that what they got is what they requested. ATMs are almost always honest, so it’s probably correct.

Then they get in their car and drive off, running directly into the person in front of them who didn’t find it necessary to move along like a normal person should.

OK, I know. It’s not nice to make fun of blind folks, but I’m really not. I’m making fun of ‘situations’ where someone finds it necessary to cater to their ‘needs’ even if it’s dumb. I’ll tell you right now, when I go blind, Diane’s going to do all that stuff, not me. Just like she does now. I’m not allowed to use the ATM.

After church, we went to Zhens for some great Chinese food. We love that place, and I’ve talked about it before. Today I made a suggestion to our waitress that, considering the enormous size of their portions, they should just serve it in take out containers and save the need for washing plates. The problem, however, is that, since the take home container is totally full after eating, they’d have to serve the other part on a plate, anyway. Really. Here’s proof … 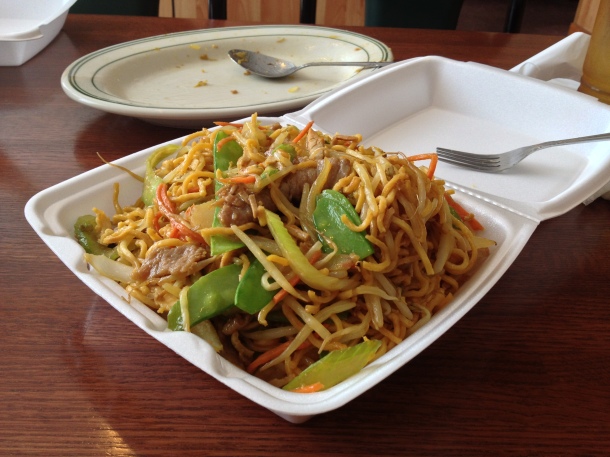 After lunch, we took a trip to the St. Helens water front to see what was going on. Happily, The Maritime Heritage Festival was still in progress, and we got to watch the waterski show. From the car. 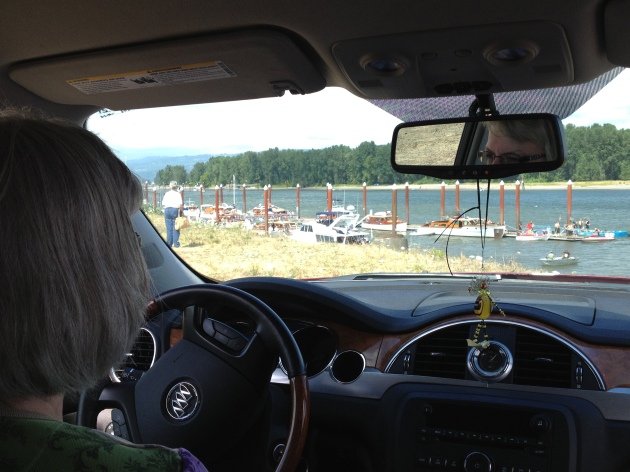 What fun. I got out and went down to sit with an older gentleman on the rocks. He was taking lots of pictures. I learned that he has a little shop in town where he sells postcards that have his photos on them. They are all from the Columbia County area. Gotta look this guy up and see what he’s got. 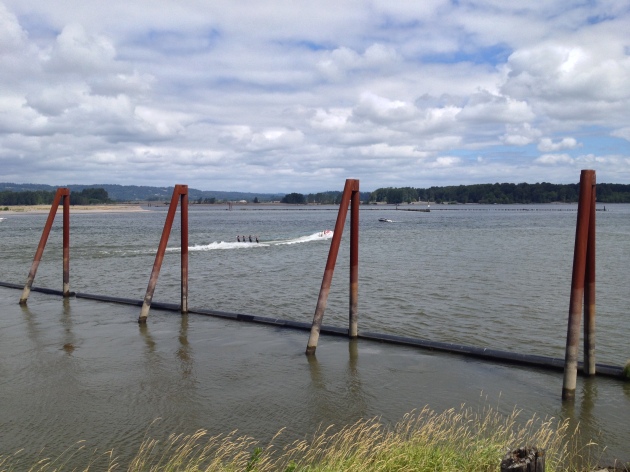 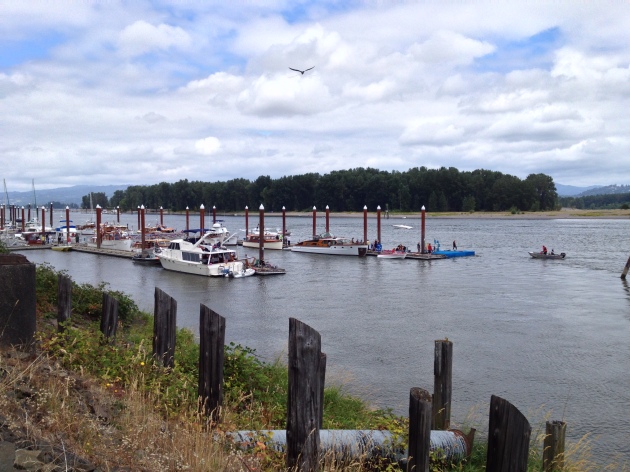 We must have been there for an hour, or so. During that time we watched more than a few cargo ships go up and down the river, and watched the sternwheeler, Portland, sail up the Columbia, heading back home, no doubt. Very picturesque and peaceful. 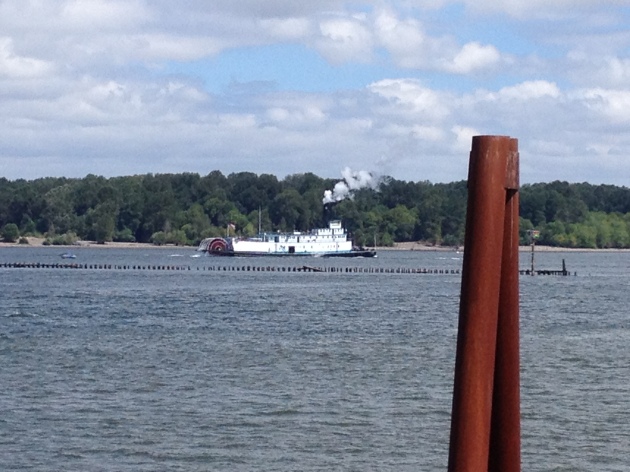 … and, here’s some of the routine traffic that transits the river past our quiet little corner of paradise … 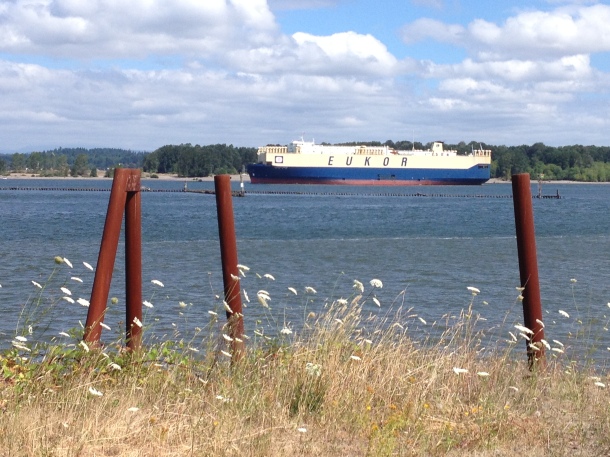 Thinking about comments from at least two of you, I did some research on the internet about publishing written works. There’s a lot of info out there about doing it and I’m absolutely sure most of them require a fee in association with their TGTBT offers. You don’t get that data until you provide your email address, which I didn’t. TGTBT, by the way, is my newest acronym for Too Good To Be True. It’s not original, just shorter. I’m sure there’s info out there for free, too, and I don’t have a problem with people providing information for a fee. It’s business. I might just use an Apple app I found that allows me to publish to iBooks. I’ve had it for a couple of years, so maybe it’s time to check it out.

First, however, I need something to write about. Sitting down to write a story, something with structure, is difficult. Nothing I do has structure, writing or otherwise. And I lie a lot. So, I’m limited to fiction. Being limited it difficult. Now all of this is a quandary.

The pie is done so I have to quit. It’s a cherry one. My favorite.