It’s Sunday afternoon. A hot one. Temp is currently 81 at 7:30pm, down from the 88 we experienced in Longview, Washington where we went for lunch after church. Diane had a hankering for Sizzler so that’s where we took her Mom.

May 1st for us started off with Daniel’s birthday. Daniel, in case you forgot, is my first wife’s son-in-law, father of Cedric, Lydia, and Jeran, and husband to Jennifer. He turned 38.  I don’t know how that happened so fast … seems like just yesterday he and Jennifer wet just youngsters starting their married life. Now it’s been almost 20 years. Wow! To celebrate his birthday, Daniel BBQd shish kabobs and wieners. I got to see Brianna again, and met Alyssa, one of Lydia’s softball teammates who was there because they had a game right after the party. Concerning Alyssa, my thunder was yanked out from under me right at the greeting when both Jennie and Lydia told me that she had already been told about me and to not believe anything I say. Consequently, we didn’t converse much except I was able to share with them that the advantage of having a mustache when you’re old is that your upper lip doesn’t get shiny when your nose drips. That’s a simple truth.

On May 2nd the WELCA ladies began setting up for the annual Bethany Quilt Show at the church. My jobs were few and simple because Diane didn’t want me to injure my right shoulder any more than necessary, so I didn’t. All I did was carry card tables to the basement and string up many of the wall hangings that were provided for display. Doing the wall hangings made it necessary to hammer tacks into the newly painted area in the stairwell, but that was OK. It’s a tradition. When things started getting frantic, with hoards of people showing up with quilts they wished to display, I was able to separate myself from whoever was giving me instructions at the time, made a dash for my car and went home to mow the lawn.

Before doing that, however, I had a chance to say hello to Floyd who was make rounds on the new lawn mower that he purchased for the church. It works so nicely that I knew I’d never be able to mow my yard again unless I did some maintenance on my mower.

So, the first thing I did upon arriving home was to get all my gas cans and go get them filled. This gave Panzee an opportunity for a ride, which she loves to do. Once back at home, I removed the mower deck from the tractor, drug it out into the back yard, and power washed it, removing thick layers of grass that had been accumulating for about 5 years. I’ve been meaning to do this every year, but it didn’t happen until May 2nd.

The blades, three of them, were about as sharp as the edge of a sidewalks from all the large rocks I’ve chipped away at over the years, so I decided it was time to make them right. I ground on them until many parts of them were shiny with new marks from the grinding wheel, reshaping the flattened end to one that was fairly sharp, giving it a much better chance of cutting grass instead of ripping it out of the ground. I couldn’t wait to get it back together to see how it worked.

It worked so nice that I could hear the tick of each blade of grass as it was plucked from the lawn and hurled up the exit tube to the grass catcher with no resistance because I had removed the sheet metal screws that was holding the two pieces of tubing together and replaced it with duck tape. Duck tape always works. It was like new. Jerrie was happy.

May 3rd was the first day of the quilt show so Diane had to be up and gone early to finish preparations. To make sure she was up on time I had a 0715 telephone appointment with my VA doctor to see how things were going for me since cutting back on my medication. It’s been fine, thank you, but my shoulder hurts really, really bad most of the time. This affliction occurred years ago when I saved a cat’s life by not stepping on him while walking barefoot down basement stairs in the dark. It’s a short story but I don’t have time to report it here. Besides, I think I’ve done that before. So, my doctor told me to go get a xray of my shoulder when I had a chance. Since Diane wasn’t available to drive me right away I made a command decision which was, thankfully, OK with Diane, to go on Monday. After talking with the doctor I had a little nap then went back to the church with Diane in case there was something I needed to do to help with the quilt show. I stayed until lunch because everyone knows there is nothing quite as good as Church Lady Food (CFL). 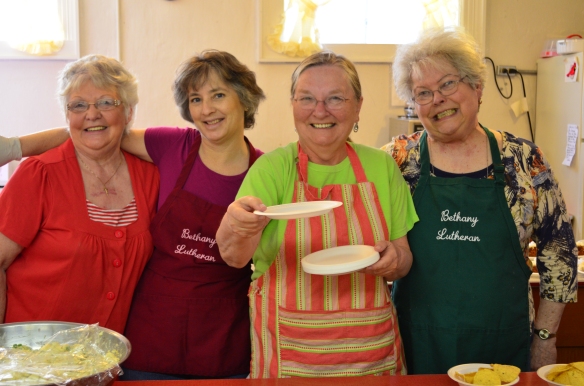 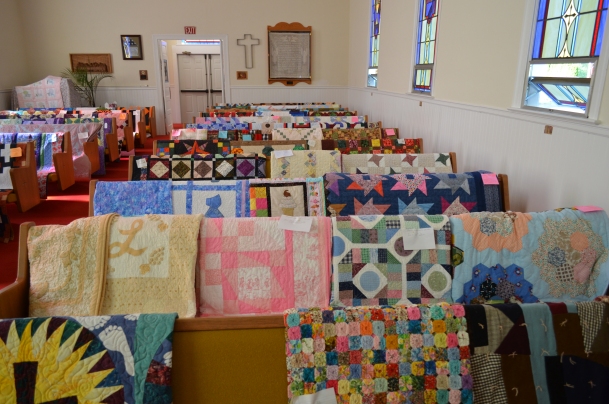 … and here the Queen Bee Quilter’s Chair, and some of her work. The QBQ this year was someone many of you already know … Wynette, my brother Jack’s first wife. Thankfully they are still on speaking terms. Wynette worked really hard to get a lot of quilting projects ready for this show and everyone was excited about her displays.

May 4th was the 2nd and last day for the quilt show and things were a lot more calm. I was called in to perform a little emergency maintenance when someone cracked the toilet seat in the ladies rest room. I used my ACE rewards card to obtain a special deal on the replacement. Turns out the one I installed was exacry like the one that broke. Hope it lasts a while. I stayed for lunch because I just couldn’t pass up all that CLF. After lunch I went home and took a nap. I didn’t mean to take a nap. I sat down to think about all the things I needed to do and it just happened. I probably should have gone with Jennie to Clatskanie to watch Lydia’s game, but I didn’t. Instead, Cedric and I went back to our house for some quality time together. He promptly fell asleep on the couch while I watched various TV shows in the Man Room. Jennie stopped by on her way home to get Cedric and they visited for a while. Lydia had a great game. She pitched the entire game and hit a grand slam. They won the game 16-1. Nice. Before they got here Cedric woke up and decided he was a bit hungry and wanted salad. I retrieved tupperware containers of various vegetables and he was amazed that they snapped together. His comment was, “now my life is complete!” Funny how tupperware can affect some people that way.

May 5th, Sunday, church. More CLF at coffee hour while Diane counted all the money from   the offering. I actually forgot about that part because I was supposed to help. Instead, I was busy talking to people, and I knew most of them. After all that was done Diane trapped me and her Mom in the Buick and took us to Longview for lunch at Sizzler because that’s what she was hungering for. I like the Sizzler salad bar because it has fried dead chicken and I really like fried dead chicken. I ate a lot of it then had ice cream and I wasn’t even hungry when we got there. I just ate to be polite so Diane wouldn’t have to eat alone because her Mom didn’t eat. The day was absolutely beautiful making the drive to Longview along the Columbia River incredible. Being a native I took it all for granted and read a book on my iPad all the way. After dropping of Jean, Diane’s Mom, we returned home and sat on the porch for a while, enjoying the afternoon breeze. Then, as evening approached, we decided to celebrate Cinco de Mayo by having a Taco Bell dinner. I had my normal … 3 crispy taco supremes, and 1 chicken burrito supreme. I mentioned I love dead chicken, didn’t I?