Today Diane tricked me into the car then drove me to Seaside where she had book a room at the Hillcrest Inn. I can only guess that she figured that i would confuse the name of the hotel with our home address. I must admit that I was temporarily confused when she took off my blindfold, which I was encouraged to wear for the entire trip. It wasn’t bad, actually. I had a little nap then we were there. Like magic. I should have known something was up when she made me pack a suitcase.

I really didn’t have to wear a blindfold. And, I knew where we were going, but I know you probably already figured that out. I’m so transparent.

On the way here we stopped at Astoria Safeway Gas Station for gas, then went to COSTCO and got the surprise of our short lives. It was closed. Actually, it’s not only closed, it’s turned into a strip mall and none of them are COSTCO. So, I did a little investigation and discovered that it was moved a few miles down the road toward Seaside. It’s in a brand new shopping mall that wasn’t there last week. Well, it wasn’t there the last time we were out this way and neither of us can remember when that was. Maybe one or two years. I guess they can build an entire mall in that amount of time. If anyone’s interested, there’s still lots of open space if you want to come over and build a store. COSTCO and Home Depot are already there, so think up something different.

The reason we stopped at COSTCO was to get lunch. We love their ginormous Polish dogs. For $3 we can both eat and walk away satisfied. The downside of the $3 meal is that it cost an additional $150 for all the other things we didn’t need.

We drove the rest of the way to the Hillcrest Inn without further expense. Ruth, the owneress, met us at the front desk. We knew it was Ruth because that’s who Diane made the reservations with and Ruth called Diane by name. She’s a very nice lady.

We got all checked in and visited our room before getting the luggage, and other “stuff”. It’s a suite. Cute. And we can see the ocean. For the price, it’s exceptional.

After getting settled, we bundled up and headed for the boardwalk. The Seaside Aquarium is just a block away. They have a really cool whale skeleton hanging in their front window. Nice. At the boardwalk, we turned left and headed for the Seaside Turnaround which is an international landmark known throughout the world as the place where Lewis & Clark ended their epic journey. That’s probably not epically correct, but it has a nice statue commemorating that event so it’s good PR for the city. There were people walking all over the beach, and many standing on the boardwalk pretending to watch the sunset. I say pretending because the sky was overcast and it was just getting dark and no one could see the sun. It just got darker, and darker. The was a guy taking a video of the waterfront building’s lights. I walked in front of him and waved at him. He waved back.

By this time we decided we were getting hungry and headed down Broadway (I think) toward Duggars for some good seafood. On the way we stopped and at many of the eclectic shops lining the street. Nifty stuff. When we got to 1st street we met Virginia, from our church, heading toward us. We chatted a little bit then parted mentioning that we were headed for Duggars. Virginia shrugged and said, “they’re good, but I always go to Norma’s Ocean Diner when I’m in Seaside”. We, of course, had never heard of it so decided to give it a visit instead of Duggars. Turns out it was an excellent choice. Norma’s is rated as one of the best restaurants on the Oregon coast. It’s been there for 35 years. Go figure. So, we figure that’s the reason we met Virginia on the street. She led us there.

Diane had halibut fish and chips, and I had a classic dungeness crab louie. Diane’s came with a cup of chowder, which she doesn’t like, so I ate it. It was absolutely wonderful. So was my louie, and Diane’s fish. Easily the best either of us has ever had. So, it was a terrific coincidence that we encountered Virginia on this, the last day of 2011, in a town 120 miles from home. Pretty cool coincidence 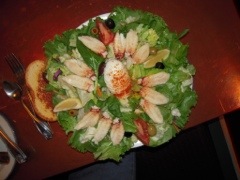 From Norma’s we headed back to our room which was only 1.5 blocks north. We stopped at the office to pick up an extra blankie for Diane because she like to have heavy covers and the ones on the bed appeared to be pretty light. Plus, it was chilly in the room when we left. But, when we returned it was toasty warm, probably because we cranked the thermostats up in both rooms before we left. They worked nicely.

Now we’re all cozy in our room watching an NCIS marathon. It’s 8:41pm (2041 if you have a military nature), and it’s almost time for bed. Perhaps we’ll watch the ball drop in NYC at 9pm then go to bed. Staying up until midnight just isn’t in our best interests. We’re old.