Does anyone else wonder why the media is making the coming eclipse appear to be, like, the end of the world? Here in Oregon everyone is urged to stock up on food, gas their vehicles, batteries, candles, and be careful with their pets during the 2+ minutes of darkness. It’s like a major disaster is pending.

Early on we heard local media at home treat this event “like” a catastrophe and make sure everyone has all the survival equipment they need to weather the storm, but it seems like the comparison is no longer being made – omitting that reference makes it sound like the real deal. Kind of like “War of the Worlds”.

Diane just checked the internet, which is functioning just fine here, in case you’re wondering, and saw news about all the “Eclipse Traffic” in the Prineville/Bend area. It’s bumper-to-bumper on the major roads in that area. Amazing.

Me? I’m just going to continue like normal, like it’s just another day with a brief bit of welcome shade, right up until the earth explodes. If I’m lucky, I’ll be eating a fudge cycle  when it happens.

Now, add to all that hoopla about the eclipse, we have demonstrations going on that are on the verge of being touted as domestic terrorism by some government officials. Nifty. Hate groups seem to be coming out of the wood work.

To make it worse, the media seems to think the blame for these events fall directly on President Trump’s shoulders. Interesting. These folks have been around far longer than Donald Trump.

Sorry for jumping on that wagon. I normally don’t do that, but all the negative news about what’s going on is disturbing. There doesn’t seem to be anything good happening anywhere according to reporters. So, let me share some with you.

This morning I took the dogs for a walk to the off-leash area for a romp and, hopefully, a major potty stop. It was early and the temp was fairly reasonable at less than 80 something. While there I struck up a conversation with another dog owner, Amber, who lives in Eugene. She found this dog park after looking at all of them in the area and deems it to be the best one around. It’s at least a full acre of fenced ground with water, and lots of sawdust piles in which to play. I always find it interesting that when animals are left to their own devices, they seem to all get along just great.

Anyway, Amber and I talked small talk for a long time, then got down to specifics like, “does she come there often,” and “what’s your favorite color,” and stuff like that. That’s a lie, of course. I didn’t ask her what her favorite color is. I did, however, considering the location and her perceived age (late 20’s), ask her what she taught. I actually asked that .. “what do you teach?”

That raised her eyebrows, thought for a bit, then asked in turn, “did I say something to make you think I am a teacher?”

“No,” I responded, “but it just seemed like the right question.”

From there we talked about many things, including dogs, and I suspect we parted company with mutual respect. Her respect for me for not hitting on her like I’m sure many men do because she’s very attractive, and my respect for her because of her dedication to her chosen career. She obviously enjoys what she does and I enjoyed my brief encounter with her, even though I don’t have any idea what her favorite color is.

Diane made another couple of trips to Walmart* today, something she enjoys, then she made another trip this afternoon to get the winning ticket for the $400 million + Power Ball drawing. We’re due to win. Just like everyone else in the good old USofA, and Canada. Who knows? Maybe this is the one. It is, after all, the new American Dream.

For being good, Diane stopped on her last trip back to get dinner at Taco Bell.

For most of the day, when Diane was out shopping in air-conditioned spaces, this is what my view was when I opened my eyes.

By tipping my head up a little, this is what I saw.

After walking the dogs a little ways from the parking spot, this is what I saw on the way back. 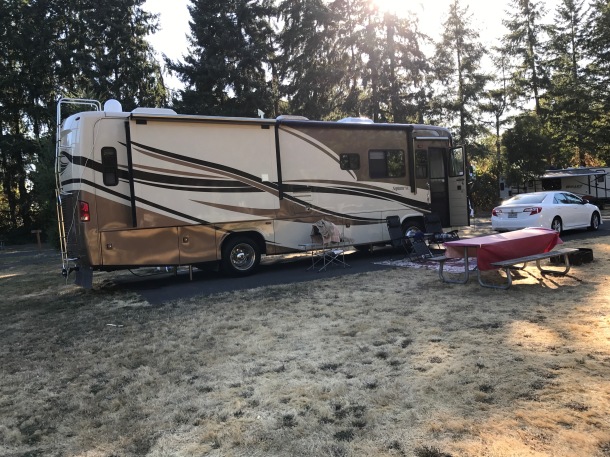 Looking a bit to my left I could see our nearest neighbor. The sites here are very far apart.

That neighbor, incidentally, serenades everyone at night with either his banjo or his bass. He told me he’s in a bluegrass band and needs to keep his fingers limber. He’s very good at his craft … fun to listen to.