Today I got up early and stepped out onto the balcony to see what the weather was like. It was really nice, and there were no clouds obstructing Mauna Kea. I could even see the Keck Observatory right on the tippy top. Hard to believe that that mountain is 13,756 feet tall. I mean, look at it. Those palm trees are taller than that! 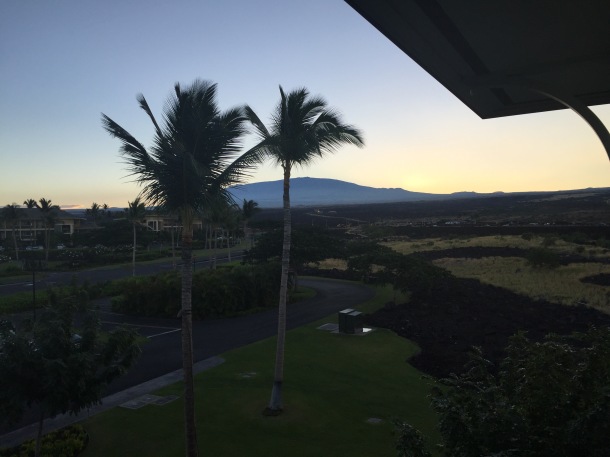 Diane got up shortly after I did and suggested that we start eating as much of the food we have left as we can so our luggage won’t be so heavy when we check in for our flight home tomorrow. All we have left to eat tomorrow morning is 4 eggs, two pieces of bread, most of a jar of peanut butter, a bunch of crackers, three apples, a bag of chips, and 3 more bottles of wine. We should be done with that in a few hours.

After breakfast we drove over to the Waikaloa Village side of this massive complex to check out the dolphin pool ($250 to pet them), and to see if our favorite covered lounge chairs were available so we could hang out and watch the sunset.

When we got to the entrance, the shuttle train was just sitting there waiting for us. Since we needed to travel to the extreme far side to the best sunset viewing area, we got on the train and rode it all the way to the end, to the building that looks like three of the olympic ring circles from space. Or the front end of an Audi. When it’s following you really close.

The lounge chair pair we wanted were kind of isolated on a little hill and it, as did all of the other lounge chairs located along the water side of the area, had little signs on them that they must be reserved. Seeing a little booth not far away, I wandered over to see what was necessary to secure our coveted lounge chairs. That’s where I met Kona. Before discussing chairs I mentioned that he had a cool name and asked if it was really his name or a stage name. He said it’s really his. I let him know that I thought it was an absolutely, totally appropriate name for a young man, who works at Waikoloa, not far from Kona, to be named Kona. What a coincidence.

Kona told me the lounge chairs cost $58 for the day and they come with a cabana boy or girl who would supply water, drinks, and food as necessary for the duration of our stay. Talking it over with my lovely bride, we decided $58 didn’t seem bad since we hadn’t spent much on anything else, so I went back and told Kona we’d take it. He said that since it was really slow people wise, if we waited until 2:00 pm it would be half price. He said that because he knew we were going back to our room for a while to eat lunch and that it would probably take an hour.

Back at the room we had a microwave prepared tuna macaroni and cheese casserole which was extremely good. Ir had to be done in the micro because we didn’t have a real oven to work with. It worked out well because my bride is a crafty cook. By the time we got done it was after 2:00 pm. By the time we got back to the sunset viewing area it was after 2:30, but our lounge chair choice, #5, was still vacant so I went to Kona’s little booth and attempted to book it for the remainder of the afternoon. He declined, telling me that it was so late, and there weren’t many people around, to just use it, no charge. I tipped him $10, which he was very reluctant to take, and went back to #5 where my bride awaited my return.

We settled ourselves, and began the wait by drinking water and trying to avoid looking directly at the sun which was right in front of us. It was very bright and made our eyes burn. Literally. They burned. It was distressing to me so I reclined my chair and closed my eyes for a short nap. For that I will no doubt pay dearly tomorrow when I awake with blisters on my nipples and around my belly button. It’s going to hurt a great deal, I’m sure, but they will hopefully keep me warm when we return to Oregon tomorrow afternoon where its way less than 86 degrees. And not sunny. Or dry.

The sun went down, as planned, and it was pretty, but not overly dramatic. Still, it was very nice to be sitting in the same place we spent on our 45th wedding anniversary trip. Sunsets in Hawaii are special no matter if they are dramatic or not. That’s especially true when you’re with your one true love. As was I.

After the sun was gone we groped our way back to one of the bridges, took a wrong turn, and wound up at a boat dock where a boat was just being loaded. That was very good because it meant we wouldn’t have to walk all the way back to the entrance which was about a mile away. Really. It’s about a mile.

The boat ride was very nice. We got back to our assigned vehicle and headed out of the parking area but had to stop at the entrance to get a good look at all the palm trees that were decorated for Christmas. Very festive.

Then it was back to our room where we decompressed and went to bed for our last night on the island. It’s been a very good, relaxing vacation. It always is over here. One day soon we hope to have all the kids come with us so they can experience it with us.

Here’s a natural swimming area where folks can visit with the fish and turtles. It’s connected directly to the ocean but completely safe for kids and old people. Snorkelers abound in this pool.

This waterfall is at the end of the swimming area. The path goes behind the water should one choose to walk instead of swim to the other side.